(All the photos in this post are courtesy of Martina Santi) 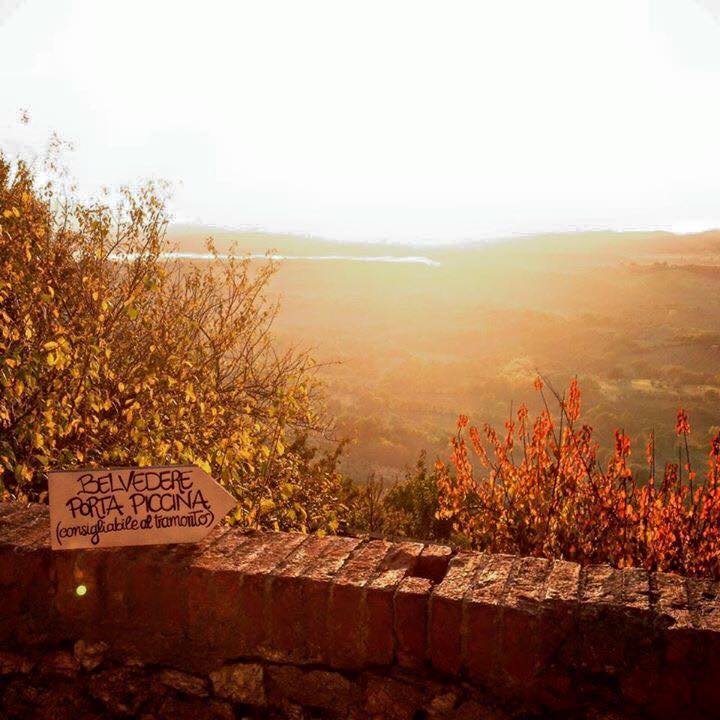 It’s good. It’s where the new and the old blend.

It’s where the older people and the newer generation interact.

It’s when the traditional habits get reinterpreted with a contemporary eye. In other words, it’s how small villages like mine or the spirit of the neighbourhoods in larger towns and even cities survive and the national or regional culture and identity is preserved. 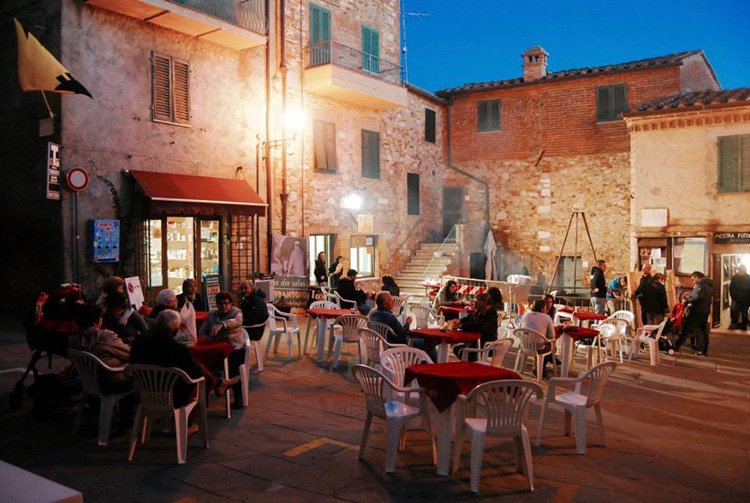 In the past, I have already written about the olive oil festival in my village. But this year, I would like to write about it again from a different perspective.

What is traditional about it?

Olive oil and the food served. In the old days, olive oil production was the main means of support for the people in my village. There were many olive presses, big and small, where people in the area used to bring their olives to be pressed. Most people in the village either worked as labourers in the olive groves or in the olive presses. The olive harvest lasted for weeks, and families relied on that income to save for the entire year. “Buchi unti” (greasy holes – yes, that hole…) is still the nickname by which we go today. If you are curious to know why, you can read about it here. 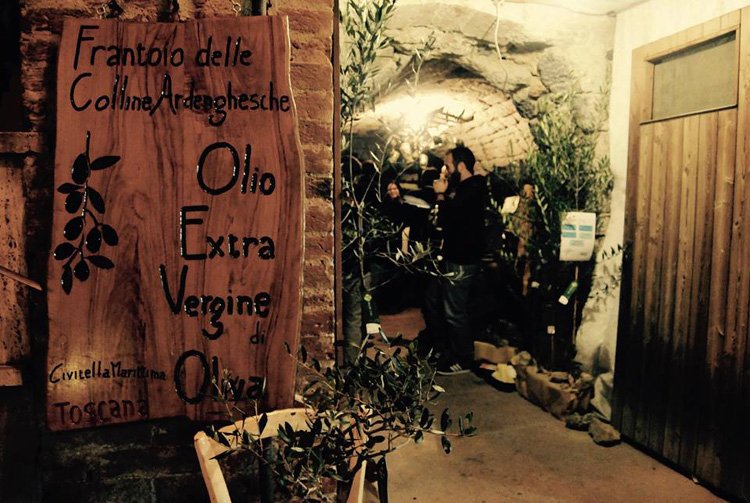 Olive oil is still a big resource for the people in the village. The old olive presses have been closed and transformed into homes, restaurants or just cellars. A brand new olive press, modern and functional, has been built just outside the village and between October and January employs a fair number of people from the village and the surrounding countryside. 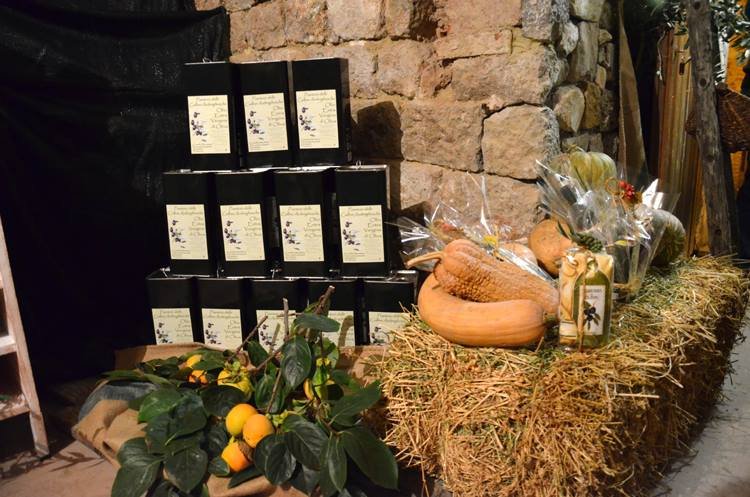 Now, where’s the charm in a modern, semi-industrial olive press, you may think. Well, it’s in the fact that it keeps the tradition of olive oil making alive. And they make it as a cooperative enterprise. In 2015, like their 19th and 18th century ancestors and their ancestors long before them, men and women from the village have contributed funds to build the press, continue to work in it and keep the art of olive oil making alive. Just like their grandparents, and their great-grandparents. They do not use large hand-carved stone wheels anymore, nor do they store olive oil in terracotta vases (called “ziri”). They use modern stone wheels, and hygienic aluminum containers up to the modern standards of the food industry.

The olive oil festival is the perfect opportunity to stage their excellent product and to offer visitors an opportunity to discover our beautiful village and area and our great food. 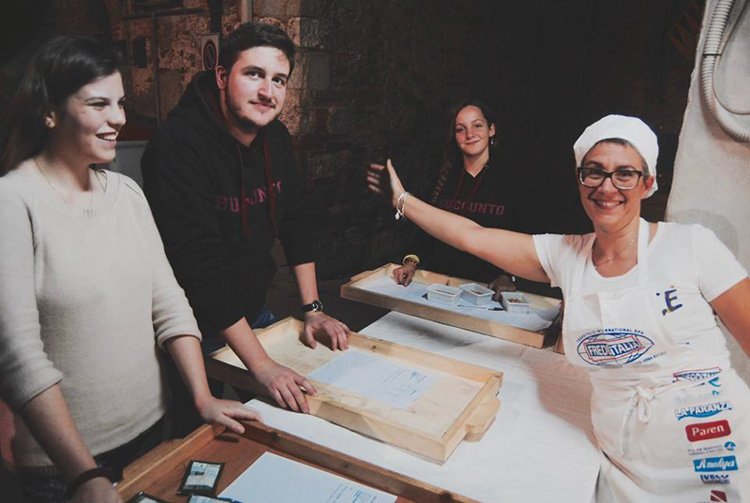 The food offered at the festival is still prepared by the women and men of the village according to their recipes. It’s a social event as well, because in order to prepare food for hundreds of people, they spend days together getting ready. This was once the norm during the harvest time. So that is also a way in which tradition is preserved.

The festival itself. The olive oil festival is a new thing. It’s no old ritual. It’s not ancient tradition. It’s an event which was started just a few years ago to bring people back to the tradition of olive oil making and to make our olive oil as well-known as it deserves to be. 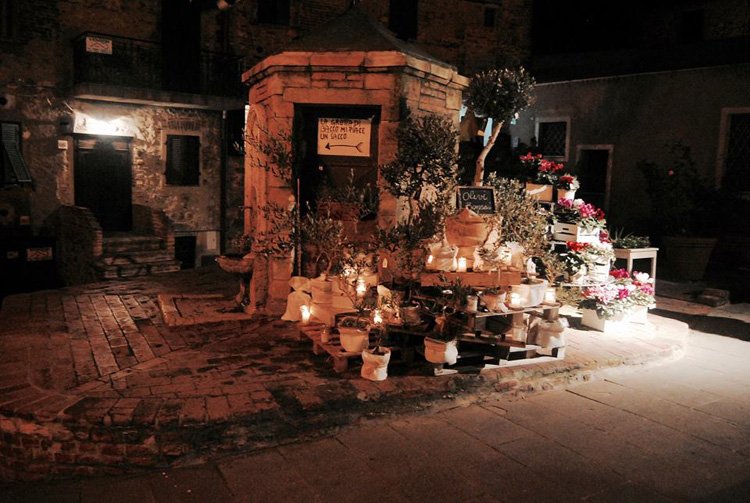 Now, it doesn’t mean that it’s fake. Village festivals are rooted in the Italian culture, so this is just a new instance of an ancient ritual. And it preserves the format of the village festival. It also has the merit of bringing together several things that are part of the “Tuscan fall rhythms”: caldarroste (roast chestnuts) and castagnaccio (chestnut flour pudding) are served in one of the main squares, vino novello (the new wine) is served for the first time after the grape harvest; donzelle (fried bread) and ciambellini rossi and con l’unto, the traditional desserts of the village, are sold in stalls. And the old cellars are open to the public. This offers the unique opportunity of entering very old cellars which still feature original architectural details and very old hand made furniture. They are privately owned and normally closed to the public. 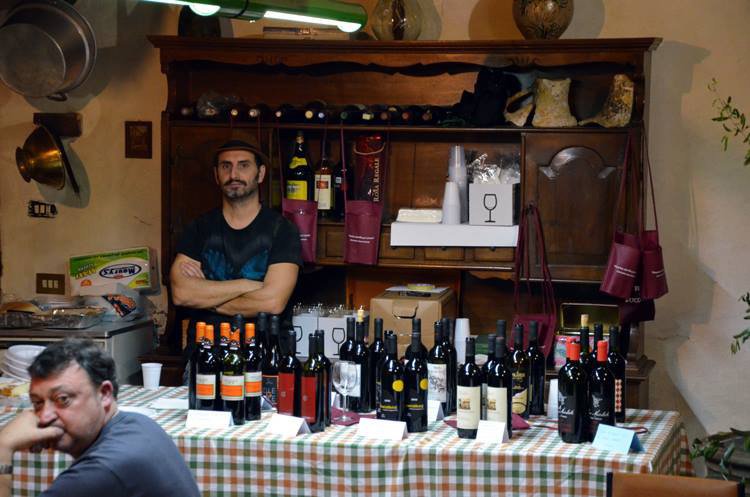 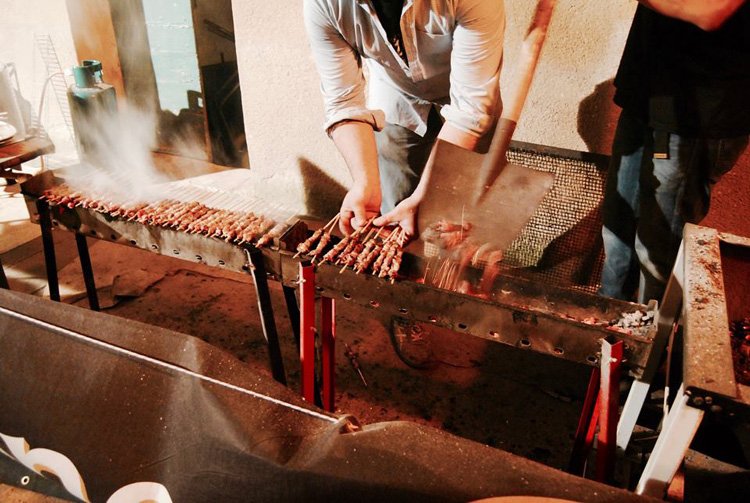 The newest and the oldest thing of all, though, are the people. That’s right. The festival is kept alive by the young kids of the village. Some of them might not have ever even set foot in an olive grove if it weren’t for the festival. They work, and they work hard to make this perfect. And they succeed. It is a fabulous event, which gives you an idea of what olive oil has meant for the village for centuries. This is just another way it keeps us alive. 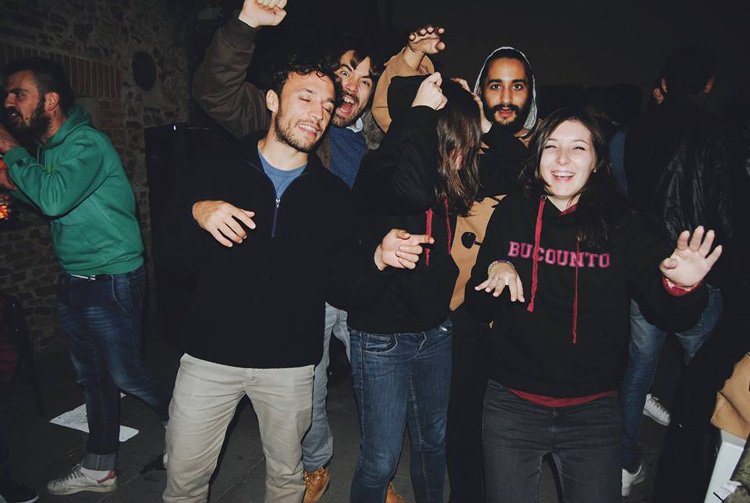 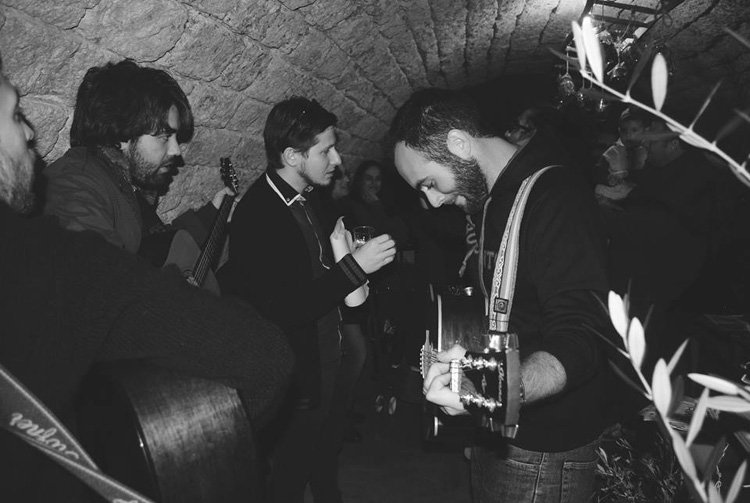 And I find it amazing that young people put their time and effort into this with such a generous and enthusiastic attitude. 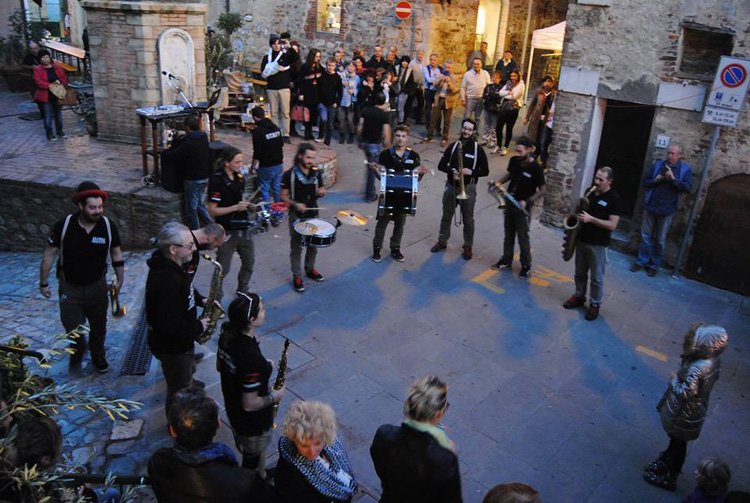 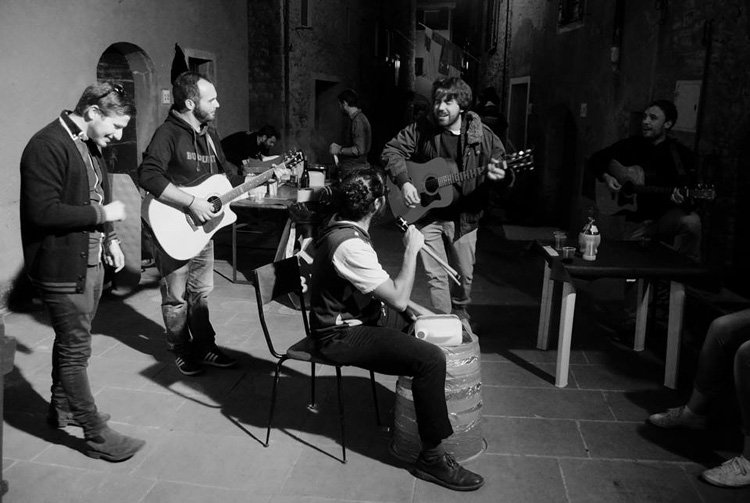 The olive oil making process might not be what it used to be 100 years ago. 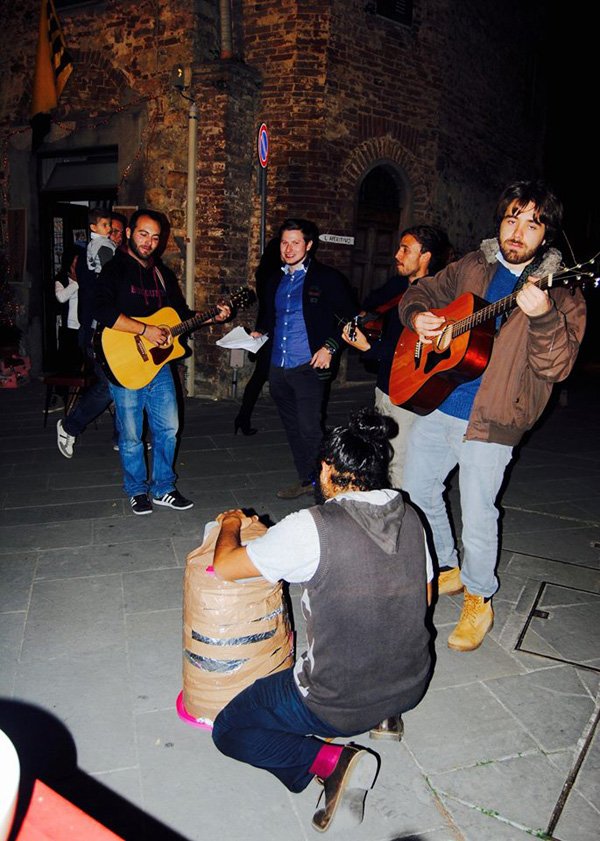 But the smiles and the hard work put into keeping the village and its traditions alive are. And this to me is the real meaning of a traditional event.

(Many thanks to Martina for letting me use her photos: hers is one of those beautiful smiles!)

If you plan a trip to Tuscany in the fall, take a look at our vacation house in Tuscany near Siena or our Pisa apartment.

This is a post in a monthly series called The Italy Blogging Roundtable. Here you can find the posts of the other bloggers who participate in the roundtable. Our topic this month was “tradition“: