This is Tuscany too: Monte Amiata

To most people, Tuscany means gentle rolling hills dotted by stone farmhouses, cypress trees lining winding roads cutting through vineyards and olive groves. Not many people associate Tuscany with large sandy beaches or beech forests. But Tuscany is not just the Chianti region or the Valdorcia: it is also the Maremma and the mountains of Abetone, Garfagnana and Monte Amiata.

I have wanted to write about Monte Amiata for a while, and when we decided to dedicate this month’s Italy Blogging Roundtable to “mountains”, I could not think of a better chance to do it.

Monte Amiata is the highest mountain in Southern Tuscany and it is located in the southern part of the region. I have grown up looking at its majestic shape from my windows, like most people in southern Tuscany. This ancient volcano, now extinct, can be seen from the famous hill towns south of Siena such as Pienza, Montalcino, Montepulciano and Cortona, but also from the hilltop villages of the Upper Maremma such as Campagnatico, Cinigiano, Roccastrada and our village, Civitella Marittima.

Besides being a familiar presence, Monte Amiata is also a place that holds great memories for me.

People in the area escape to its highest slopes to get some relief from the heat of the summer. My parents and uncles and aunts used to organize day trips to the mountain all the time when we were young. We would set off in the morning with our picnic baskets, blankets and toys and come back late in the afternoon when it would get too cold up there.

I have always loved these days out, and to this day, the beech forests and the chestnut groves on the top of Monte Amiata are still some of my favourite places on earth. 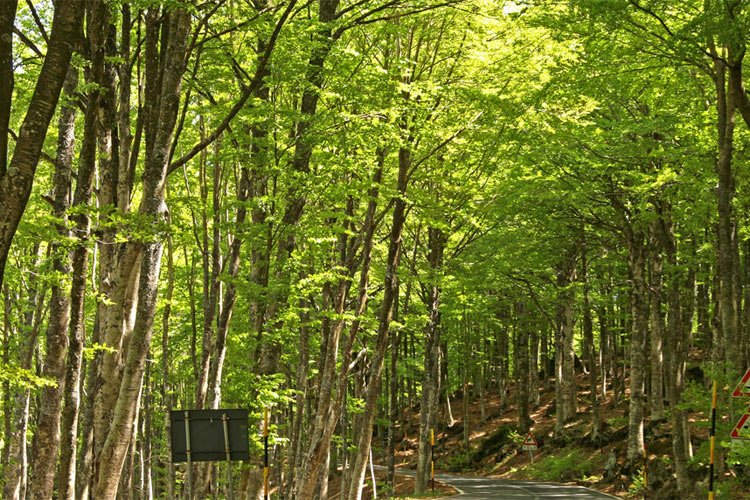 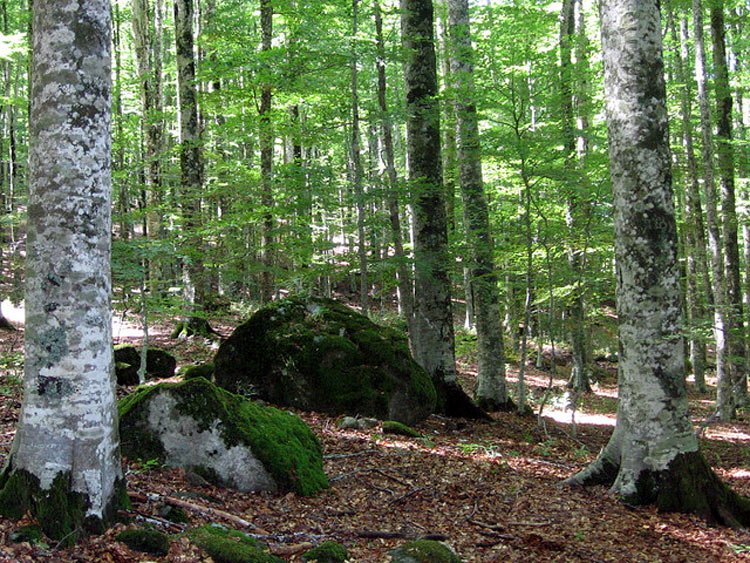 My cousins and I would “explore” the woods, climbing up and down the big rocks covered in moss, digging holes in the dead leaves, gathering sticks for the fire (you could still light your own grill back then – now there are public facilities where you can bbq so as to limit the risk of fires as much as possible). The fun was usually spoiled by the sudden appearance of a large spider or by one of us getting hurt! We would then go back to where our parents were and lay on a blanket, playing cards, listening to music or reading a book. And after you had been running around, nothing was nicer than a nap under a warm blanket, in the cool mountain breeze we would be dreaming of soon enough, once we were back at home in the heat.

Part of the day was usually spent at Prato delle Macinaie, a large lawn at the bottom of one of the ski slopes (obviously closed in the summer). There were lots of other kids there we could play with, bars where we could get ice-cream, and the chair-lift that takes to the top of the mountain, another favourite. There is a large metal cross up at the top. 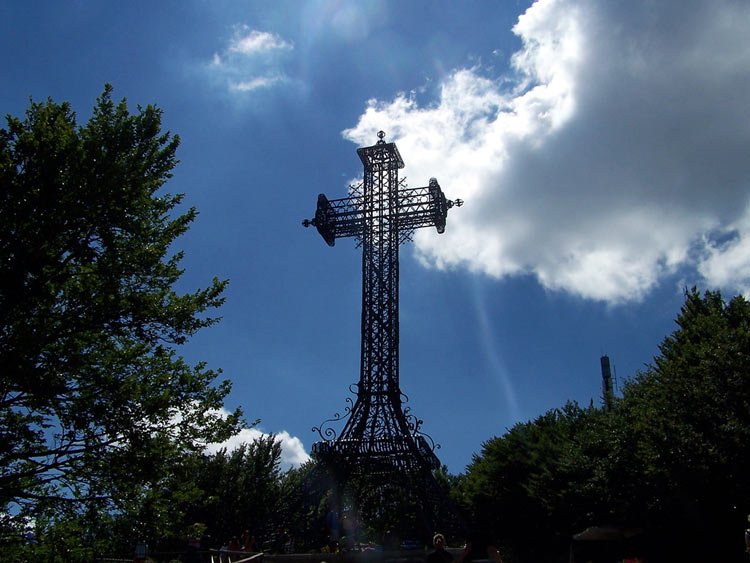 In the evening, if our parents did not feel ready to go back home, we would stop either in Castel del Piano or Arcidosso for dinner. Both are cute little towns with a few restaurants and shops and some nice medieval buildings. Arcidosso has a castle too. 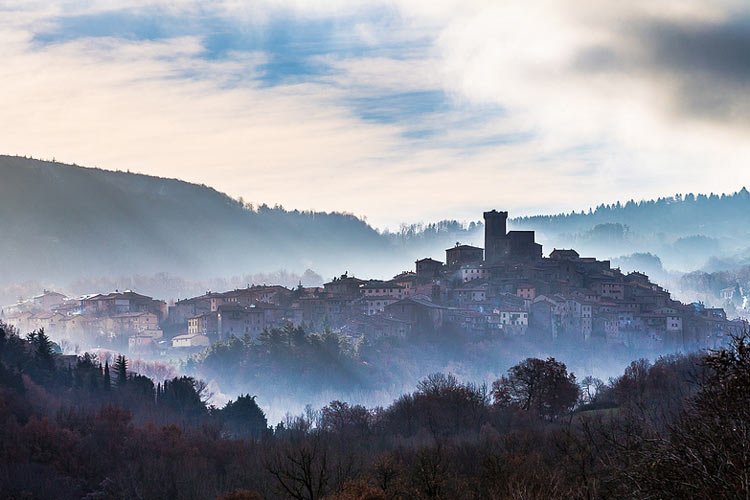 My love for Monte Amiata has never changed. We even chose it as our location to get married. We got married in a little church in the middle of a chestnut grove that I used to visit on those day trips: Pieve di Santa Maria ad Lamulas. 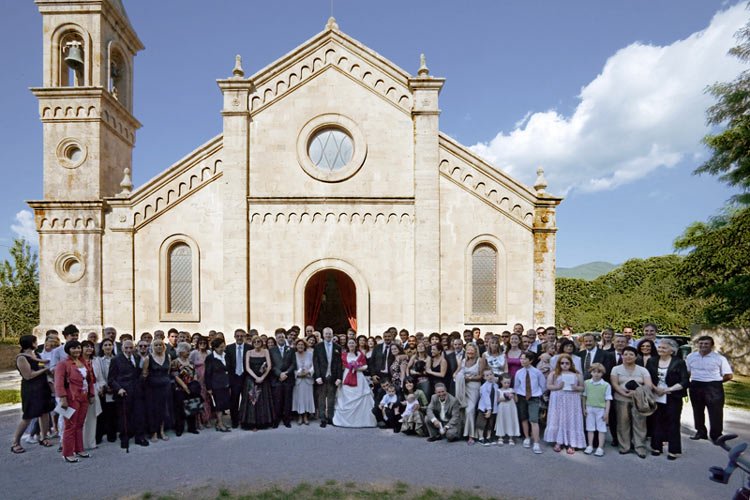 The Pieve has a long history. It dates back to the 9th century, even though it was severely damaged by a fire in the 13th century and then supposedly rebuilt by the Templars, who used to stop here to rest on their way to Abbadia San Salvatore. The church has a central nave and two aisles separated from the nave by some huge pillars. At the end of each aisle, there is an apse, and the central apse houses a gorgeous wooden sculpture of the Virgin Mary holding baby Jesus. A legend says that this statue was miraculously spared by the fire, despite being made of wood. For this reason, it is worshiped by many in the area. 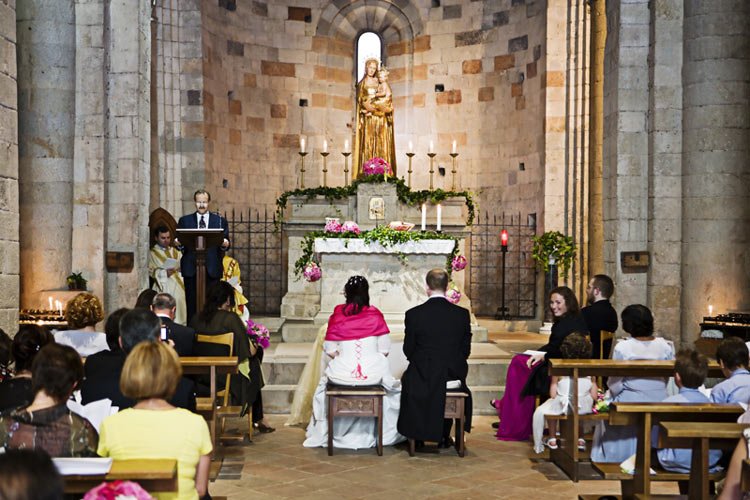 Another legend narrates that it was sculpted by lightning hitting an oak under which a shepherd was seeking shelter during a storm. Contended by several towns, it was placed on a mule with the understanding that the town where it would have stopped would have kept the statue. The mule went back to the woods where the oak originally stood and knelt down on the threshold of the church. The two holes left by its knees are still visible, and some trace the name of the church back to this “event”: the locals call it Pieve della Mula, that is, the church of the mule. 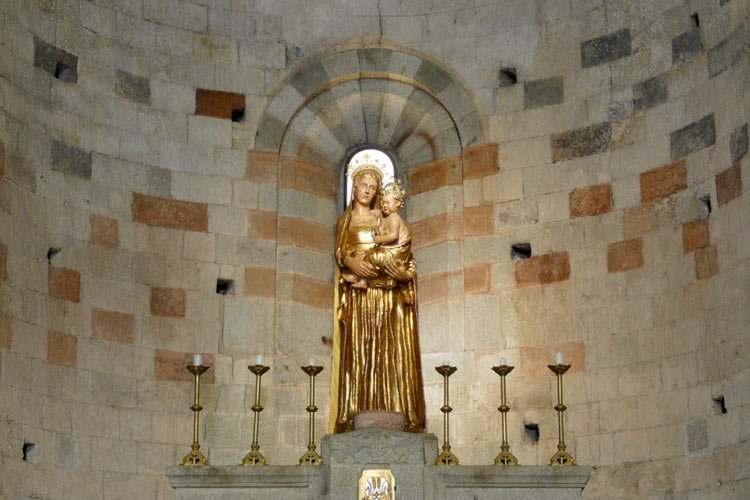 The name though derives in fact from an ancient Latin word meaning “stream“: there is a “little stream” flowing by the church (“lamula” from “lama” – stream of water), and surfacing in an ancient fountain just outside the church. The fountain is at the bottom of a staircase and it is crowned by a basrelief representing a snake, traditionally connected with the Mother Goddess, source of life, a Celtic symbol.

The church is rich in mysteries and legends. One of the pillars is decorated with darker stones which form a spiral. This is said to be a warning and a reminder to the people praying there: it is the symbol of ascent and descent, of passing from the earthly pleasures to more spiritual ones. The pillar, located in the darkest point of the church, is the symbolic trait-d’union of earth and heaven, the “axis mundi“. 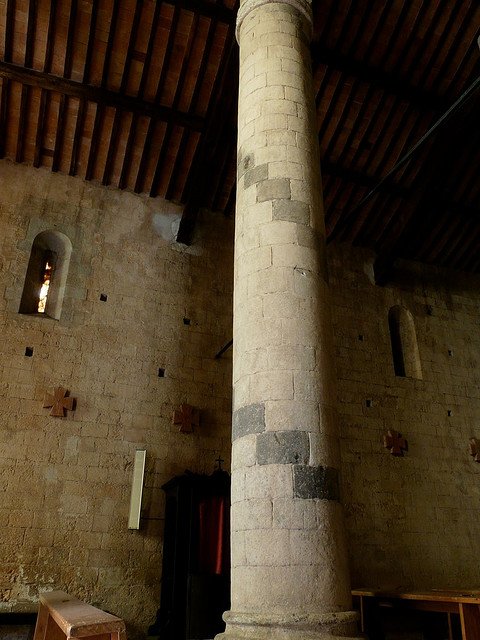 The same symbolism, dedicated to the travel of men through life, is found in the window behind the altar. It is decorated with a zig-zag motif which symbolizes the difficult path to heaven.

Another interesting thing is the presence of some older stones sculpted with motifs of Celtic and even Norse origins. It is possible that they were part of a previous sacred building, probably destroyed and converted into a chapel long before the Pieve was erected on the same grounds. Including parts of previous buildings is quite typical of medieval churches. When a new church replaced a previous one, a few stones were used in the construction. They were frequently placed upside down so as to symbolize the “seeding” of the sacred. The Pieve contains several of these stones and other really interesting bas-reliefs (two knights fighting, a little dog, the flower of life in a circle, etc.) representing symbols that can be traced back to the Celtic tradition.

On the first Sunday of April, the Pieve hosts the very ancient Festa della Pina, literally the festival of pines. Young men give a pinecone placed on a decorated stick to the young girls they intend to court. If the girl who receives the present is interested, she gives the young man a biscuit shaped as a ring, which symbolizes acceptance to be courted.

Monte Amiata and Pieve ad Lamulas are an easy daytrip from Casina di Rosa, our vacation rental in southern Tuscany.

This is the 19th post in a monthly series called The Italy Blogging Roundtable. Here you can find the posts of the other bloggers who participate in the roundtable. Our topic this month was “hills or mountains“: