10 “alternative” things to do in Tuscany

Patricia of Got Saga asked me to contribute an article to her blog, and I did with pleasure. This is a slightly longer version of the article I wrote for her.

10 alternative things to do in Tuscany

Tuscany is one of the most popular destinations in Italy. Most travelers to this region, though, don’t venture outside the major landmarks. For this reason, they sometimes go back home thinking that Tuscany is a mostly touristy destination with lots of tourists everywhere. Quite to the contrary, Tuscany has lots of places that are easy to reach even if you choose to base yourselves in one of the popular spots but which are definitely off-the-beaten-path. These places can offer you a completely different image of this amazing region, certainly one of the most beautiful places in the world, and make for outstanding day trips.

Tuscany was home to one of the most ancient Italic civilizations: the Etruscans. They were powerful and thriving long before the Romans made their appearance on the scene and visiting the remains of their ancient world is one of the most impressive experiences both for adult and younger visitors to the region. One of the most incredible hikes in the entire region is that though the network of roads carved by the Etruscans through tall tuff stone walls near the beautiful town of Pitigliano:  the so-called Vie Cave.  Nobody really knows how Etruscans managed to cut these passages through stone, nor what their actual function was. The most credited hypotheses are that they were either water channels or sacred roads connecting burial grounds and other sacred grounds. A magical walk you won’t easily forget. 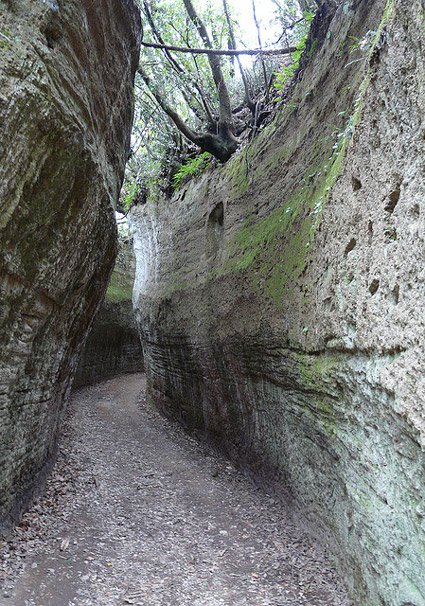 Most people know that Tuscany is made of gentle rolling hills and open countryside. Most of those landscapes, which are typical of the Val d’Orcia and of the Sienese Crete, were created by an ancient volcano, Mount Amiata. Mount Amiata is the highest peak in the region, at 1700 m above sea level. Its slopes are dotted by small villages and towns, which have a distinct atmosphere. A visit to Mount Amiata is a way to discover a completely different facet of Tuscany, with its beech tree forests, the chestnut groves, the small churches hidden among large volcanic rocks. The woods that cover the top of the mountain are one of the most popular picnic destinations among the locals, who venture there to escape the heat of the long summer days. There are equipped areas where it’s possible to barbecue and sit at one of the many picnic tables. Or you can bring your own picnic food and choose a more private hideaway spot in the woods: it’s never too crowded. If you feel like some sightseeing too, the town of Abbadia San Salvatore has a fabulous medieval abbey, and the drive from Castiglion d’Orcia to Montalcino is simply breathtaking, especially if you are travelling by motorbike. 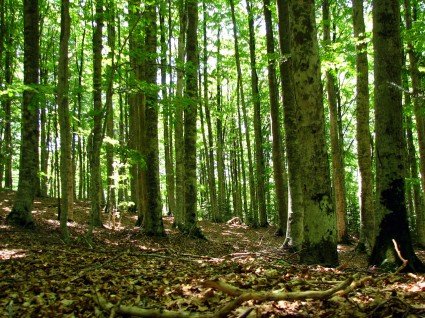 Italy does not have much which is specifically meant for younger travelers. Tree climbing parks are a notable exception and are perfect for a fun family day on the coast. Cielo Verde Adventure Park is a tree climbing park with itineraries ideal for all different ages. It’s located in the pine tree forest that lines the coast of Marina di Grosseto and makes for a perfect morning activity which can be ideally followed by a relaxing afternoon on the beautiful beach of the Maremma. 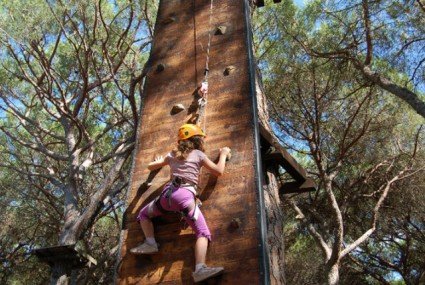 4. Horseback ride in the Maremma

The Maremma is a loosely populated area, with plenty of itineraries that are ideally discovered on horseback. Hire a guide for the day, and he will take you through what is considered the wild west of Tuscany, along paths that cut the Mediterranean maquis that covers the hills, through rivers that run through the plains, and past old farm houses and ancient ruins. 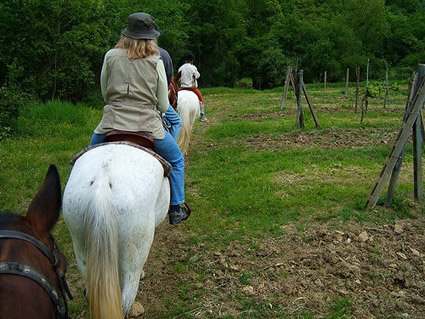 5. Minicruise of the Tuscan archipelago

Tuscany is not only famous for its art heritage: its nature is also just as impressive. Not many people know that the coast of Tuscany is among the best in Italy, and even fewer people know that Tuscany is home to a spectacular archipelago, which is a paradise for divers and sea lovers. If you are on a tight schedule, one great way to enjoy a day at sea is to go on one of the 1 day mini-cruises which set off daily from Castiglione della Pescaia and Porto Santo Stefano and take people to the main islands of the archipelago including the Isle of Giglio, the Isle of Giannutri (a limited-access nature park with a fabulous archaeological site), the Isle of Elba, Capraia, Montecristo and Pianosa. The mini-cruise usually include a seafood meal on board and several stops to visit the islands and take a swim where is allowed.  Yet another way to discover one of the many facets of Tuscany. 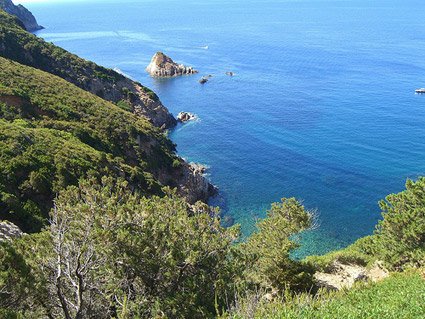 Pisa is famous for its Leaning Tower, but it has many other treasures. One of them is the beautiful nature park of San Rossore, which stretches from the city to the coast. One cool and romantic way to discover the park is to visit it on a horse-drawn carriage, just like the many noblemen and artists who used to spend their vacations in Pisa in the 19th century used to do it. 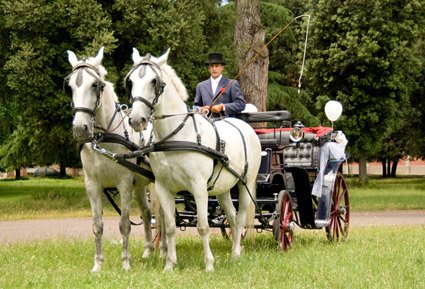 Another area of Tuscany which is very different from the better known images of the region is the mountain area north of Lucca called Garfagnana. This area is dotted by remote towns, semi-abandoned villages, and old large farmhouses where life must have been very hard only 50 years ago. Garfagnana is perfect for hiking but also to spend some time away from it all. One place that certainly allows for an away-from-it-all get away is the hamlet of Isola Santa. The hamlet is on the border of a small lake in the heart of the Apuan Alps. It was abandoned long ago, and some of the houses have recently been renovated and transformed in vacation rental apartments. From the hamlet, trails through the surrounding woods lead to other small abandoned villages: a magic hideaway in Tuscany. 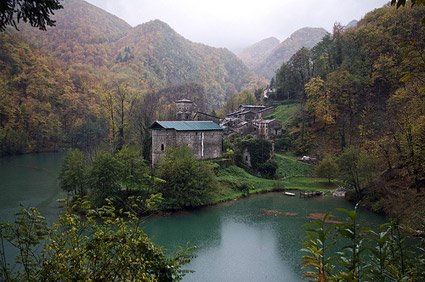 8. The monasteries of the Casentino near Arezzo

The wooded area called Casentino, near Arezzo, are the cradle of medieval Tuscany. Since the area is not central to the most popular destinations and definitely not the type of landscape you see on postcards and guidebooks, only few people venture there. Italians, though, love it. The Casentino forest is actually a national park, with great hiking and horseback riding itineraries. The park is dotted by ancient towns with castles and old churches. But the most impressive sites are La Verna and the Camaldoli Hermitages. La Verna is famous because St. Francis of Assisi received his stigmata here and it is a popular destination for pilgrims. Camaldoli is one of the most impressive Benedictine monasteries in Italy, dating back to the 13th century. Hiking through the Foresta Casentinese to the hermitages is an unforgettable experience. 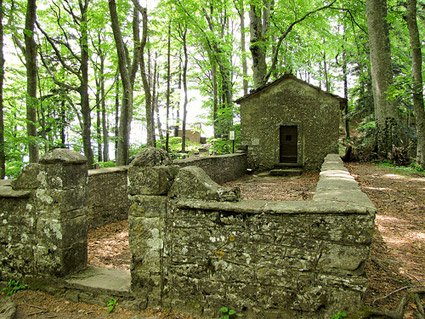 9. The Roman-Etruscan sites in Populonia and the beautiful Gulf of Baratti

A daytrip to Populonia and Baratti, on the coast of the Maremma, is a very rewarding experience. Populonia is home to a large Roman-Etruscan archaeological site, with well-preserved remains of houses, public and sacred buildings, burial grounds (necropolis) and roads. The archaeological park is quite big, and there are several itineraries that visitors can follow to visit it and for which you will need between 1 h 30 minutes and 2 hours and 30 minutes. From Populonia, where there is also a great fort on a very panoramic spot, you can walk down to the beautiful cove called Golfo di Baratti and enjoy a day on one of the best beaches in Italy. 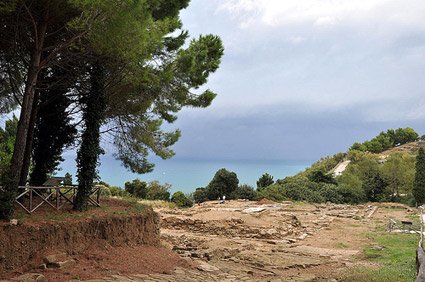 The Val d’Orcia is one of the most popular areas in Tuscany, but even in such a well-known area there are interesting sites that remain off-the-beaten-path. One of the most impressive is the park created to preserve the ancient medieval mills which supplied the region of Siena with flour. The park is near the pretty town of Bagni Vignone, famous for its thermal baths. 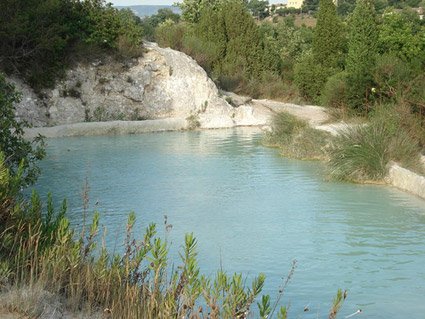 Tuscany is much more than the usual popular spots and venturing out off the beaten path does not mean missing out on something, but enjoying true treasures away from the crowds.