San Galgano Abbey and its warriors

Today was the first Sunday in a long time that we didn’t spend the whole day fixing Casina di Rosa. We are finally done with the renovations and we can finally get back to our lives! We took advantage of this “freedom” by going on a daytrip to San Galgano Abbey with Marcel’s family. A friend who manages a lovely wine bar in the woods right by the monastery of Montesiepi, Salendo Wine Bar, had invited us to an art exhibit which closed today and we kept postponing the visit because we were too busy. Anyway, today we packed the family in two cars and left from the beautiful village of Pari around noon, in time for a perfect lunch under the tall trees in the garden of Salendo. It was very peaceful (well… at least until we got out of the car with the four kids we had with us!), and the shade and the breeze there made for a nice change from the hot and humid weather we left behind.

Salendo mostly serves typical products of local producers and local wines to go with the dishes they offer. They serve hot dishes too but their specialties are crostoni with different toppings (I had an amazing crostone with cheese and pears), selections of cured meats, samples of cheeses and different types of honey and jam that go well with them, and sandwiches. The wild boar bresaola on my nephew Alessandro’s plate looked delicious, I’ll tell you that! They match every dish with the perfect wine, mostly by minor but excellent producers. 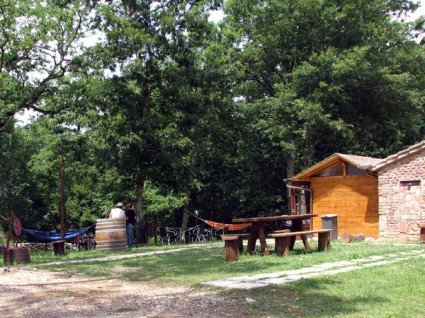 We took it easy and enjoyed the meal in the peaceful shade while the kids were fighting over the use of a hammock and then we went to see the installation in the garden under the pine trees. The setting is very pretty, with the Monastery of Montesiepi in the background. 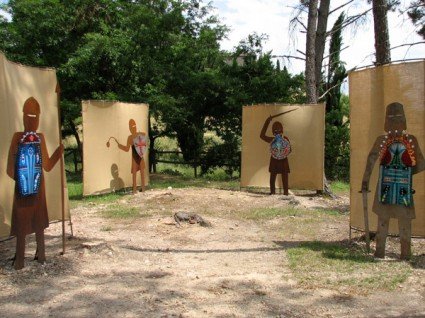 The exhibit was called “Fra Cielo e Terra” (literally, “between the sky and the earth”) and it consisted of 10 iron sculptures representing 10 warriors protecting San Galgano Abbey. The iron sculptures by the Scarì brothers served as support for the works of two other artists: the beautiful glass works of art by Laura Pesce and Felice Nittolo‘s  mosaics. 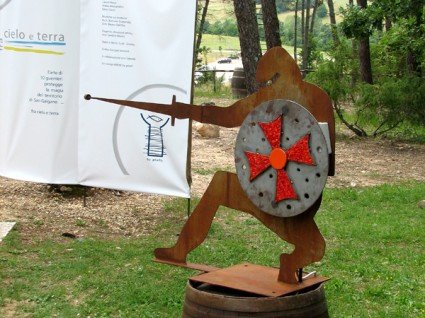 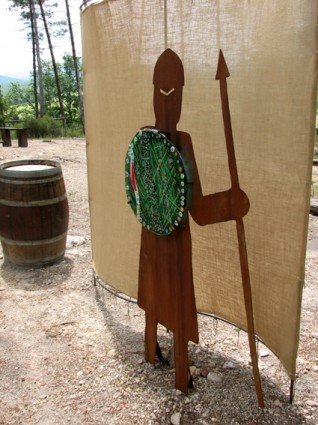 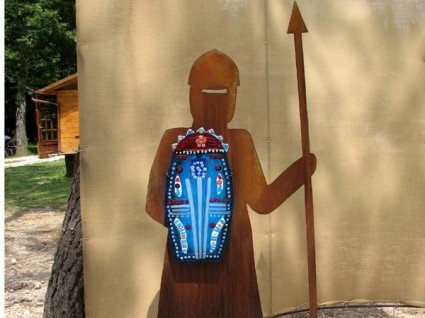 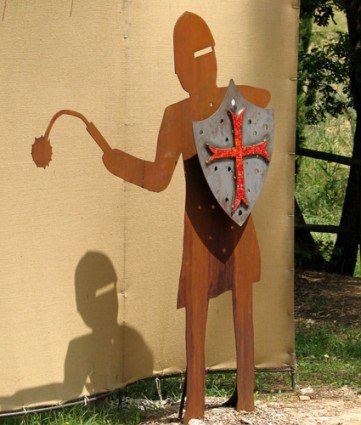 The event was managed by Krene, a design agency. It was supposed to be the preview for a larger exhibit to be installed inside the Abbey of San Galgano in 2011, but apparently the people in charge of the events hosted there don’t think the place is suitable for such an event, which, believe me, is quite silly and their loss. 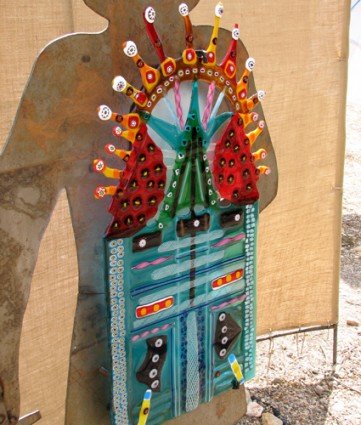 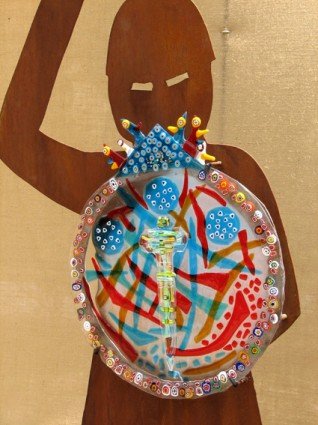 We then took a walk to the Monastery of Montesiepi, which is just few steps away from Salendo. This hermitage is not very well-known, and yet it houses one of the milestones of European mythology: a sword in the stone. The sword is said to have belonged to San Galgano, who drove it into the rock when he gave up his sinful life to become a hermit. The monastery of Montesiepi was built at the end of the 12th century as a mausoleum for the saint, who is buried in the church. The church has a very peculiar shape, it is built as a rotunda and historians hypothesize that it was inspired by Castel Sant’Angelo, the Pantheon in Rome or even an Etruscan tomb as the many ones visible in Volterra, the town that once controlled this area. The church was enlarged in the 14th century with the construction of a chapel with frescoes by the Sienese painter Ambrogio Lorenzetti. This chapel houses the hands of two evil men who, the legend says, were sent by the devil to temp the saint, and who were attacked by wolves that came out of the woods to protect Galgano. 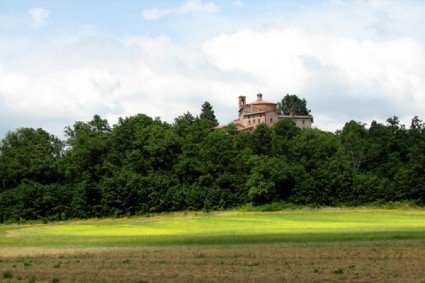 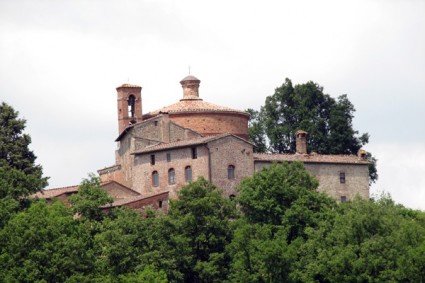 Over the centuries the sword in the stone and its legend have fascinated visitors from around the world. The many resemblances to the tales of the Arthurian cycle are striking. In his book The Enigma of San Galgano, the writer Mario Moiraghi claims that the story of Excalibur originated in Tuscany and not in the Celtic fringes of Britain or in France as many believe and that it was added to the legend of King Arthur later on. Moiraghi supports his hypothesis with scientific tests which date the sword embedded in the rock in an abbey in Tuscany to the year 1180, years before the first attested literary reference to the sword in the Arthurian Cycle. The author also stresses how the inquiry which led to the canonisation of Sir Galgano contains a series of facts identical to the legend of Sir Percival, the finder of the Holy Grail. You can read more about his hypothesis in this article on the BBC New website. 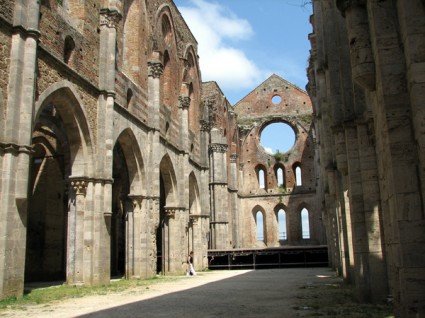 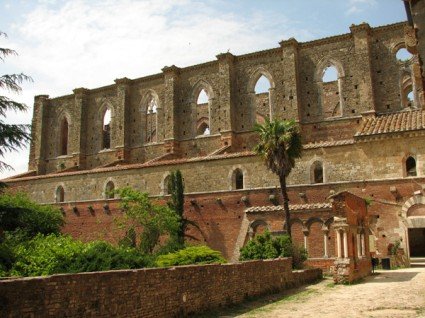 We then descended to the most famous monument of this complex: the roofless Abbey of San Galgano. The ruins of this Gothic cathedral in the Tuscan countryside never cease to amaze me. It is so beautiful! The abbey houses the Opera Festival in the summer: believe me, there are few places that can make for such an impressive setting for operas and concerts. Here is the program of the events for this season of the Opera Festival in San Galgano. This year, it includes Mozart’s Don Giovanni and The Magic Flute, Vivaldi’s Le Stagioni, and Carmina Burana. 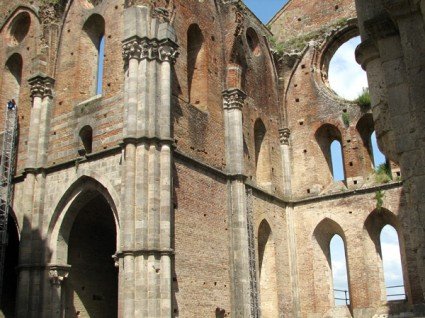 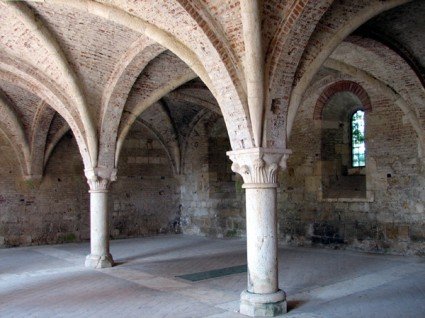 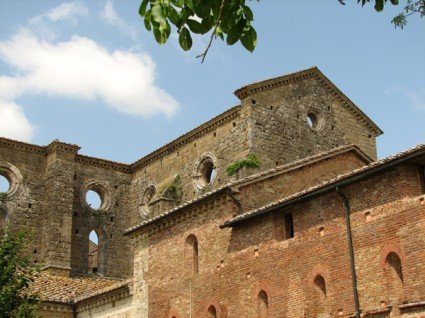 A great daytrip, especially if you are travelling with kids or if you like walking. There is a path that leads from the abbey to the monastery and a longer path that leads to the nearby village of Monticiano.