It is not always true that the off-the-beaten-path attractions in a city are smaller or more modest buildings. The imposing Church of San Francesco is hardly included in self-guided tours of Pisa, let alone the guided tours. Yet it is one of the most beautiful churches in Tuscany, with a wealth of treasures to discover and enjoy. 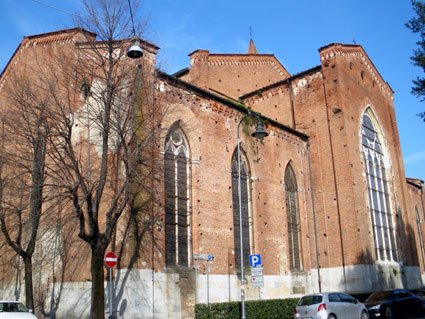 The Church of San Francesco may go unnoticed because of its hidden location in the eponymous quarter of the city, and its modest 17th century marble facade tucked in between later buildings. The square in which it opens, though, is in itself a jewel of medieval and renaissance masonry and is characterized by that mix of architectural styles that is the distinctive feature of the center of Pisa. 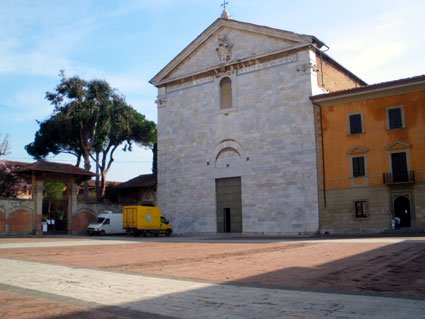 This apparently modest presentation is nevertheless deceptive: behind the plain white facade opens a fabulous textbook Franciscan church, presenting a mixture of late Romanesque and early Italian Gothic styles, with a 70m long single nave with several chapels, a very tall truss ceiling and fabulous stained-glass windows as tall as the the apse behind the main altar. Stepping inside literally takes your breath away. 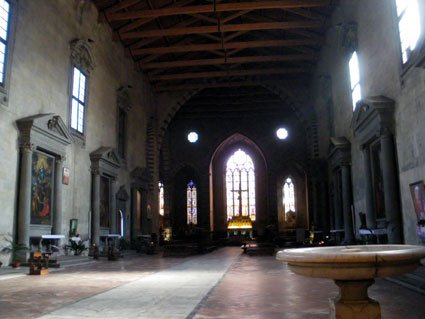 The façade is completely different from the rest of the church because it was added in the 17th century on the occasion of a restyling (check out the Medici emblem on the tympanum), but the main body of the church was built in the 13th century and has many similarities with the Basilica of San Domenico in Siena.

The Church of San Francesco has a large single nave and the transept is embellished by a series of bright chapels with large stained-glass windows. Many of the original 13th century frescoes are still in excellent condition. If you love art and you happen to stumble upon this beautiful church while venturing away from Piazza dei Miracoli, you should not miss Taddeo Gaddi’s (one of Giotto’s disciples) frescoes in the choir and the tomb of  Count Ugolino della Gherardesca in the second chapel in the right-hand wing of the transept. 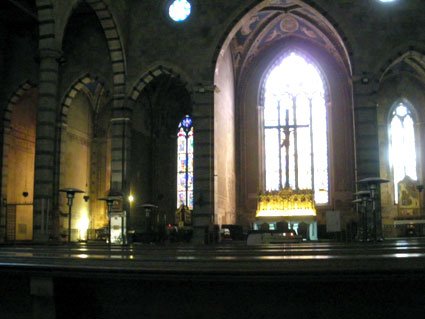 I was actually surprised that the count had been buried here. For those who don’t know the story of Ugolino, he was an Italian nobleman, politician and naval commander who, after being accused of treason, was imprisoned with his children in a tower (which is now the library of the Scuola Normale Superiore) and left to starve... The legend goes that he ended up eating his kids! Dante features him prominently in his Divine Comedy, and you can read everything about him on the dedicated Wikipedia entry (what would we do without Wikipedia these days?!), or read about his “prison” on my page on Piazza dei Cavalieri in the Quarter of Santa Maria in Pisa.

Two things can give you an idea of how important this church used to be: the many gravestones on the floor and walls, which evidence the desire of noble people to be buried in this prestigious sacred place, and the fact that Cimabue‘s Maestà was made for this church. The painting is considered an undisputed masterpiece of Italian medieval sacred art and is now on display at the Louvre museum in Paris (not sure how or when it ended up there). 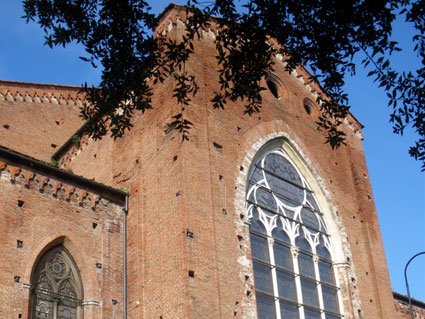 The Church of San Francesco has another surprise for its visitors: a beautiful 14th century cloister. Francesco da Buti, first commentator of Dante’s Divina Commedia is buried here. The cloister can be accessed from the Piazza as well from a door next to the portal of the church. It is a typical Franciscan cloister, with a central well, a garden and porticoes. I think the convent is still in use because I often see Franciscan friars walking by, so I guess there are still some who live there. 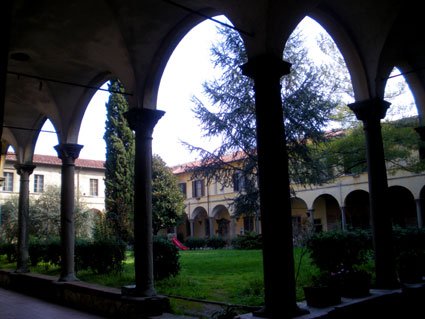 A last thing that I loved to discover about this church is the way in which the bell tower was ingeniously designed by Giovanni di Simone: two of its four walls rest on the foundations of the church, whereas the other two walls rest on arcades so as to avoid the annoying problem of damp that afflicts many of the buildings in the city. 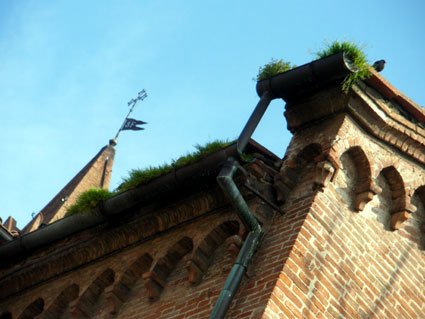 To get to the church of San Francesco you can walk down the beautiful and non-touristy Via San Francesco: that will give you a real taste of “authentic Pisa” with many stores for local people and several good restaurants and bars. As an alternative, you can walk through the meander of small medieval streets which depart from Borgo Stretto. They are also much more popular with the locals than with tourists. 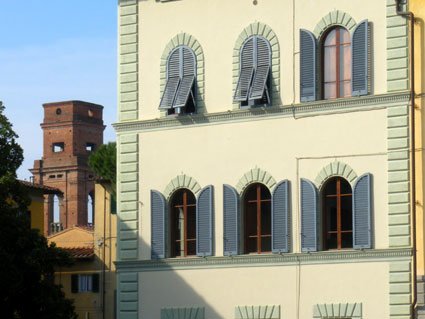 And if the walk and visit make you hungry, you can have lunch or dinner at the fabulous Osteria di Culegna or at a “spaghetteria”, Alle Bandierine, which is located  in the very same place that has housed one restaurant or another for over 400 years, can you believe it?! If you are up for a “beer pit stop”, then Orzo Bruno is what you are looking for: they brew their own beer and it’s delicious!