What does Amanda Knox have to do with hunting and village associations?

Nothing. Except that it’s 9 am and I have already received way more input that my brain can take on a Thursday morning.

After the busy busy period I mentioned in my post about my everyday life in Tuscany, I finally got a week off and we came back to Civitella, my home village. We have been here since last Monday night. A much needed break. Not that we have been off work, but the rhythms are different and it simply feels like being at home after a month in Pisa.

Don’t get me wrong: I love being in Pisa. But I absolutely need to come back home at the weekend. It recharges my batteries. 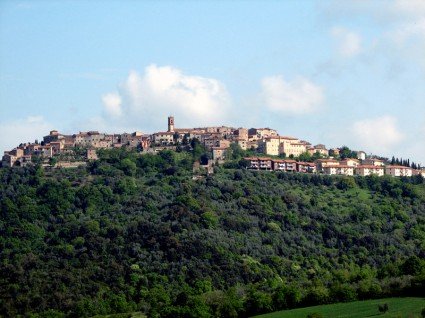 On the first day back at home, I had taste of the difference between village life and life in Pisa: two completely different lifestyles. We woke up on Tuesday morning with nothing in the house to have breakfast, except for maybe a half-empty box containing few stale cornflakes we opened back at the beginning of January when we were last here. My mum stopped by while on her way to the village.

As an a aside I should say that we also technically live in the village, but at the bottom of the hill… so if you are actually going to the main square up at the top, you need to specify that you are going “in paese”… as if you were not there already… it’s a 5 minute walk uphill… a different concept of space, I guess. The distance is probably shorter than that between my Pisa apartment and the nearest bar… but, walking up to the top, you pass a series of different “areas”: the area with the newer buildings (where we live), the square with the town hall, school and pharmacy, Porta degli Uomini (a stone bench at the top of the hill where the old village gate once used to be and which was traditionally the village men’s realm – the only public restroom in the village is there, and it’s still for men only… ), and then you are finally “in paese”. Did I mention that all this diversity is shared by 350 people?! 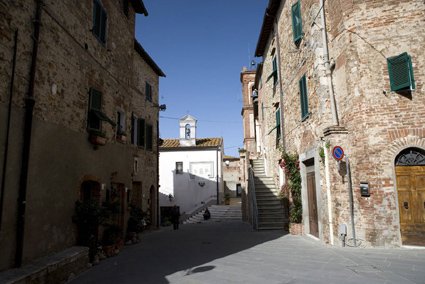 Back to my mum. She invited us over to her place for breakfast and we tried to pass on her invite saying that we would go to Bar Da Dante for brekfast as we often do when we are in Civitella. Of course, she points out, it’s closed. “Of course”? Wondering why they should be “of course closed”, I say, well, we’ll go to La Carpineta, another bar by the highway (beautiful views over the countryside, by the way!). Of course, that one was also closed. Then I remembered. It is February and the hunting season is over: time for the local bars to take a month off before reopening for the spring and summer season. I had totally forgotten that this is a hunter’s world. 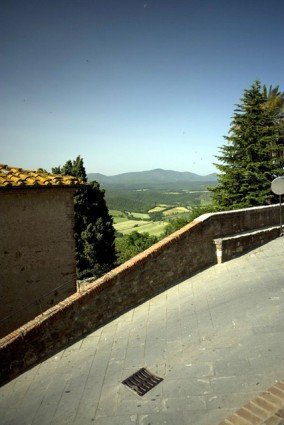 Life in a village is for many people but not for all. It is like having a very large extended family. If you like having your privacy a lot, well… you should stick with a city. In a village like mine everybody will try to have a say in what you do and how you do it. That’s ok by me: this is what also guarantees that if you are in a situation of need, somebody will be there to help you out of trouble.

Villages are like this. There is a love-hate relationship between “paesani”, but in case of need, you are never alone (mostly because half the villagers are related to you somehow…). In a village near ours, beautiful Pari, where my husband’s family lives, and where we lived ourselves for 2 years, the ties between the locals are really tight. They have this strong local association called Associazione Sette Colli, which organizes the village festival, but also yearly village trips, celebrations for the kids who turn 18, who graduate, the young couples getting married, and much more. They really work hard for the community. Because the community is all you have in these small hamlets that make Tuscany the wonderful place it is but are not easy to live in if you are used to having any service and commodity within 5 minutes from your door step, the work associations like Sette Colli do is to be praised. 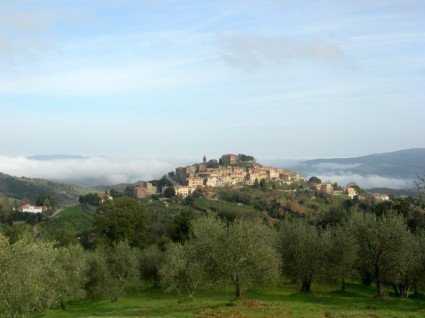 They have just come up with a fabulous project to try and bring some “fresh blood” to the village and help it survive as a lively community. The project is called “Persiane aperte“, literally “open shutters”. Closed shutters are the symbol of an empty house. They want to fill their empty houses with new families willing to come live in the really pretty medieval village in Tuscany. So in order to see more shutters open, they offer to use part of the money they earn with their yearly village festival to help families willing to move to Pari for at least 6 years pay the rent for three years. They are actually offering to pay the rent for them for the first three years, provided they accept to stay for at least 3 more afterward and become part of the community.

I think it’s a fantastic idea: generous and far-sighted. These small communities don’t need any more “alberghi diffusi” that transform them in museums. They need children playing in the streets and parents shopping in their corner stores, eating at their restaurants, having coffee at their bars: living the village.

You can see the announcement on their website: Progetto Persiane Aperte to move to a village in Tuscany. It is in Italian, so just to give you an idea of what it says:

– the candidates should ideally be parents under 40 with at least one child at school-age.

– they must choose Pari as their official residency

– people originally from Tuscany are preferred, but I am sure they will consider other candidates.

The association offers to pay the full rent for three apartments and to guarantee a low rent of 150-200 euros per month for other apartments if needed.

For information you can contact the president of the association Tommaso Minacci (+39 335 6218028) if you speak Italian, or write an email to info@parionline.it if you speak English.

So what does Amanda Knox have to do with this all?

Well, this morning I received a comment to one of my posts about Italian tourism promotion which essentially said that this person would make sure promotion to Italy was stopped and that we should be very very scared (all in capital letters…). He or she (I can’t remember because I deleted the message since it seemed so stupid that it didn’t deserve to be published) claimed that Italian people should do like people in North African countries and rebel against a rotten society where parents are sued for commenting on the police work on their daughter’s trial.

First of all, people are the society… who should we rebel against? Second, Italy has many flaws, and the way the judicial system and politics work is probably one of them. I am one of the first to say that some aspects of the way things are done now are shameful.  But Italian culture and society is much more than that. It is made of people like the ones in my village or in Pari: welcoming, helpful, sometimes irritating, but always passionate about something. It is a welcoming society, that welcomes people of all kinds and that, contrary to what happens in other states, allows us to say practically everything that comes to our mind, politically correct or not. It might not make it to the news, but one day it will. I absolutely love this: we debate about everything and we don’t give a damn if our interlocutor is upset by the fact that we believe (and say) that he’s full of it. We discuss, even argue on things we are passionate about, and we are friends again as soon as the topic changes. That’s what I like the most about my country.

It is probably hard to understand why I would give up commodities and the politically correctness that inspire some North American minds for the solidarity and warmth of Italian lifestyle any time. It is useless to have privacy and correctness if you are alone in your golden cage and if you have nobody who will tell you what you need to hear just out of fear of being out of line. There is no line here. 🙂

And by the way? Amanda Knox totally did something dreadfully wrong and she is exactly where she’s supposed to be. No, maybe she should be sent to a prison back home, so their tax payers could support her instead of us.

Isn’t this too much for a Thursday morning?!