Pisa is one of two cities in Tuscany that never had a ghetto, so this seemed the ideal subject for International Holocaust Memorial Day. The Jewish community lived and flourished in the city enriching it with their culture, traditions and buildings.

Pisa is believed to have been the first city in Tuscany where Jewish families settled as early as in the 9th century: a historical document records the purchase of a house by a Jewish merchant in 850 A.D. and Benjamin of Tudela’s recount of his journey to Jerusalem mentions 20 families living in the city in 1165. In the 13th century, Pisa was a bustling center with a Synagogue near Piazza dei Cavalieri, the political heart of the city, in the area still known as Chiasso de’ Giudei, literally “the alley of the Jews”.
Under the Medici’s rule, Jewish families were encouraged to settle in Pisa so as to boost its economy, and the population kept growing. The presence of a large community is evidenced by some beautiful landmarks in the city, such as the Synagogue and the incredible Jewish cemetery. The roof of the Synagogue, which has been in use since 1674, was severely damaged a couple of years ago, and the community is working to raise enough money to fix it and bring the place of worship back to its original splendor. 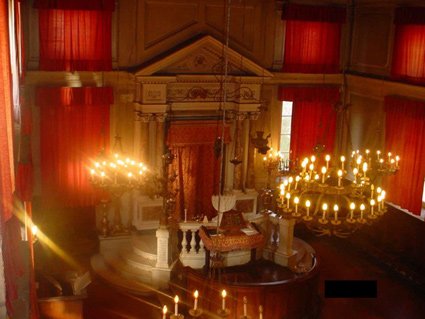 The Jewish cemetery is one of the best preserved secrets in Pisa. It is located just outside Piazza dei Miracoli and yet very few people visit it. We actually went on September 5th, the European Day of Jewish Culture, for the first time in all the time we have been living in Pisa… I had always wanted to go, but never got around to doing it. Now I am planning to go back because it’s is really beautiful and fascinating. Here you can read about our visit to the Jewish cemetery in Pisa.

Another place that is connected with the Jewish history of the city is Vitale Da Pisa’s home. In the 15th century, the building on Via Cavalca 36 housed the powerful Da Pisa family’s bank on the ground floor and a Synagogue on the top floor.

The Holocaust didn’t leave Pisa unscarred. In 1931 there were 535 Jewish people living in the city, 12 of which were sent to extermination camps and 8 more were deported but survived. The most terrible episode was the murder of Giuseppe Pardo Roques by the Nazis in 1944. He was a prestigious philanthropist, president of the local community and a local political figure. Eleven other people who were seeking protection at Pardo Roques’ house were murdered in the same attack. The house, in Via S. Andrea, is now a private residence but two plaques commemorate the terrible event as well as Rabbi Augusto Hasda and his wife Bettina Segre who were deported and died in concentration camps.

A thematic visit of the city is a good way to honour the memory of those who were murdered because of their ancient culture but mostly because of human madness.

A very interesting guidebook is the new Jewish Tours in Tuscany (pdf, 1oMB).