A homage to Pisa

I think I owe this post to the city that has welcomed me for almost 16 years now. Can you believe it? I’ve spent almost as much time in Pisa as I have in my home village, Civitella Marittima. (By the way, if you have never heard of the latter, you should check this recent article by Alexandra on her blog ArtTrav.com dedicated to art and travel to Italy!).

Today Pisa remembers the tragedy of the first WWII bombing of the city. It was on August 31, 1943.

Few people know that vast areas of the city have been rebuilt over the years. Pisa is a wounded city. It paid an enormous price during WWII: the area was bombed several times, 53 to be precise. The loss of human lives was incredible with 1753 people dead over the course of 2 years. 953 of these people died in the first bombing, which has become the symbol of the atrocity of all war and the day on which Pisans remember those tragic times. Over 200,000 houses destroyed. Factories razed to the ground. Three bridges bombed. The monumental cemetery burnt to the ground. Pisa was not bombed by the Nazis. It was bombed by the Allies.

On that Tuesday, August 31 1943, people heard the sirens as they had other times before, but the common opinion was that the bombings would not reach Pisa. The Allies would certainly not risk destroying such a wealth of historic and art treasures. They hadn’t heard what Eisenhower had said, which was something that went like this: “We are about to invade a country rich in history, art and culture, but if the destruction of a beautiful monument can save the life of even just one American soldier, then, destroy that monument”. For this reason, it was not until the 38 B-17 – or “Liberators” as these planes were called – reached the skies over the city that the local people really realized what was about to happen.

It was also a very unusual time of the day for a bombing: it was midday, when most families were at home having lunch. 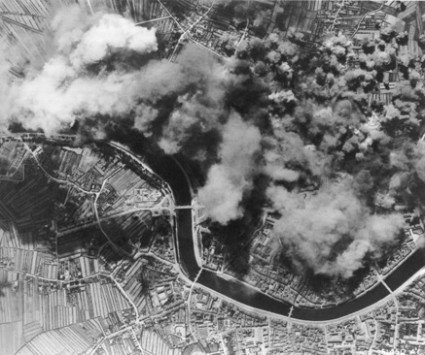 There are some moving reports from that day. Unfortunately, none of them have been translated, but if you can read Italian, or you can try using an online translator, here is the narration of the bombing of the train station in Pisa (the date is wrong – it was 1943 and not 1944).

The narration of the witnesses are also incredible, unfortunately they are in Italian too, but if you can understand the language, it’s worth watching this video. And this is a fabulous documentary by Lorenzo Garzella called La Fontana della Memoria:

The “irony” of the whole situation is that only 3 days later, the Italian government signed an armistice with the Anglo-American Allies which might have prevented such a severe bombing of a city like Pisa, which was a very important transportation hub and industrial area.

We should not forget.

And the people who walk through some parts of Pisa thinking that they look “shabby”, as I read in a forum this morning, should remember that those might be the scars of a huge sacrifice that granted freedom to an entire country. And maybe to our present-day society as a whole.

Those badly restored buildings, the few ruins still scattered throughout the city center, the few ugly buildings that have replaced ancient palaces on the Lungarno after the War, well, they are our history.

They should always be our memory.