The spring brings many cool events to Pisa!

I have already written elsewhere that, over the last couple of years, Pisa has improved considerably and in many ways. As the owners of a holiday apartment in Pisa, we have just received the list of the events which will take place in the city over the next couple of months and we were really pleased to see that there are some interesting things coming up.

So here you go: if you are considering whether to spend some time in Pisa in March or April, this will hopefully help you make up your mind (and book your flight!).

Pisa and the celebrations for the Unification of Italy

This year, on March 17th to be exact, we will celebrate the 150th Anniversary of the Unification of Italy and it will actually be a national holiday. Celebrations will happen in most cities I’d imagine. Pisa celebrates the Unification of the country with an exhibition at Palazzo Blu called Donne d’Italia. La metà dell’unità. The exhibit, open from March 16th to June 26th, will be free of charge, and a fabulous idea I would like to add, because the role of women who made the country is not very well known (the link is to a post I wrote last year about the topic).

Two more exhibitions celebrate the Unification of Italy: one about the role of Pisa in the Unification process at the University Library – Palazzo della Sapienza in Piazza Dante – (“1859-1861 – Il contributo di Pisa all’unità d’Italia”) and one at the Museo della Grafica at Palazzo Lanfranchi on the Lungarno (“Luigi Torelli, Prefetto di Pisa dal 1862 al 1865”).

And last but not least, the Notte Bianca, Rossa e Verde (the white, red and green night), a “street party” by Ponte di Mezzo on March 16, from 9:30 pm to 3 am, with a midnight toast to our 150 year old country!

On March 19 and 20, the ancient village of Cigoli, which we happened to discover only few weeks ago, celebrates its Tartufo Marzolino, a local variety of truffle with Mostra Mercato del Tartufo Marzolino di Cigoli. The Marzolino Truffle is also the protagonist of Voterra Gusto on the weekend of March 25-27.

That’s right! Few people know of the Capodanno Pisano, the Pisan New Year, but it’s a great event. From the 12th century until 1749, Pisa had its own calendar, different from the Gregorian calendar. March 25th, the day of the Annunciation – the Catholic celebration of the announcement by the angel Gabriel to Mary that she would become the mother of Jesus – was New Year’s Day. 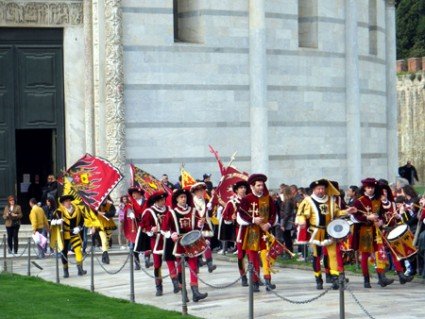 This year the city has planned lots of events around the Capodanno Pisano. Many restaurants and bars will organize dinners to wait for the arrival of the “new year” (yes, on March 25th, it will be 2012 in Pisa!), music, celebrations and parties. On the 25th, there will be the usual parade in period costumes to the Cathedral. We went last year and it was fabulous!

March 25 will also be the official beginning of tourist season. Pisa and its province celebrate with a weekend rich in events: guided tours of Pisa, Volterra and Castelnuovo Val di Cecina; special offers at spas and wellness centers in Casciana and San Giuliano Terme; extended opening hours of churches in Pisa, Calci and Cascina and of museums (Fauglia, Peccioli, Montecatini Val di Cecina) and monuments (Brunelleschi’s “Rocca” in Vicopisano and Rocca Sillana in Pomarance); wine tasting in Pisa and Peccioli; urban trekking in Pontedera; the Chocolate Festival in San Miniato and Tirrenia; sport events at the hippodrome of San Rossore and Marina di Pisa; days dedicated to traditional recipes in restaurants; shopping tours in the leather district in Santa Croce; art exhibitions in Calcinaia; plays in Lari; fireworks on the Lungarni in Pisa and good music in the streets!

So, if you are thinking of visiting Pisa in March, that weekend is no doubt the best time of the month to do it. More on the Pisa Unica Terra website.

A weekend at the spas

During the Capodanno Pisano Weekend (March 25-27), the spas of the Pisa province will celebrate with “Terme Aperte” (literally “open spas”). Casciana Terme, Terme Villa Borri and Bagni di Pisa in San Giuliano Terme open the doors of their spas: free entry to their gardens, parks and hotel facilities. Moreover, reduced prices are offered to access the thermal pools and spa treatments, as well as on accommodation and on their beauty products. A unique opportunity to treat yourself to a special weekend of relaxation, art and culture.

Celebrating the blooms of the spring

From April 1st to the 3rd, lovers of flowers will find several interesting events in Pisa and its province. Pisa will become a garden in bloom with its festival Pisa in Fiore (Pisa in Bloom). And on April 2nd and 3rd the Convent of Nicosia in Calci opens the doors of its garden for the annual event dedicated to this beautiful flower Il Chiostro delle Camelie. Here is a related article on April flower-related events in Tuscany.