From the 12th century until 1749, Pisa had its own calendar, different from the Gregorian calendar. March 25th, the day of the Annunciation – the Catholic celebration of the announcement by the angel Gabriel to Mary that she would become the mother of Jesus – was New Year’s Day.

Each year, Pisa celebrates his history with a parade in period costume, with flag wavers, beautiful damsels, and crossbowmen! Plus soldiers, drums, trumpets and obviously the Anziani del Popolo, the wise men that ruled the Pisan Republic.

The whole celebration was really cool!  The parade started from the church of  S. Giorgio ai Tedeschi and entered Piazza dei Miracoli around 11:30. The flag wavers threw flags to the rhythm of the drums, the soldiers marched with their swords, the girls carried flowers.

Only a few people know about this event outside Pisa and, since it is not high season yet, most of the other people  in the square were actually locals: they took pictures of their friends in period costume and cheered them in a very festive way.

We followed the crowd inside the Cathedral (free entrance for the occasion!) and we got a really good spot by Galileo’s chandelier: perfect to see the sunbeam hit the marble egg. Of course to find the best spot, we followed the wives and girlfriends of the figuranti (the people in costume): nobody knows better than a real Pisano where to go stand to catch the first glimpse of the Capodanno Pisano!!!

There was a mass, and then, in the general excitement, while we were all with our heads up waiting for the bright spot of light to move over the marble egg, at midday sharp, the bishop officially announced the arrival of the new year gave the blessing while struggling to talk loudly enough to be heard as his words were drowned in applause.

After the mass the parade left the cathedral, and reached the Bishop’s Palace, where the flag waver paid their respects to the Anziani del Popolo. If you want to see the photos below in a larger size, you can click on the symbol to watch the slideshow full screen.

I’ll admit it. By that point I had fallen in love with one of the crossbowmen… and I had to ask my husband to take a picture of us… wouldn’t you have?! I am sure he was originally, authentically medieval!! He must be 800 years old!! He was just perfect for the role, so I had to go and ask for a photo!!! 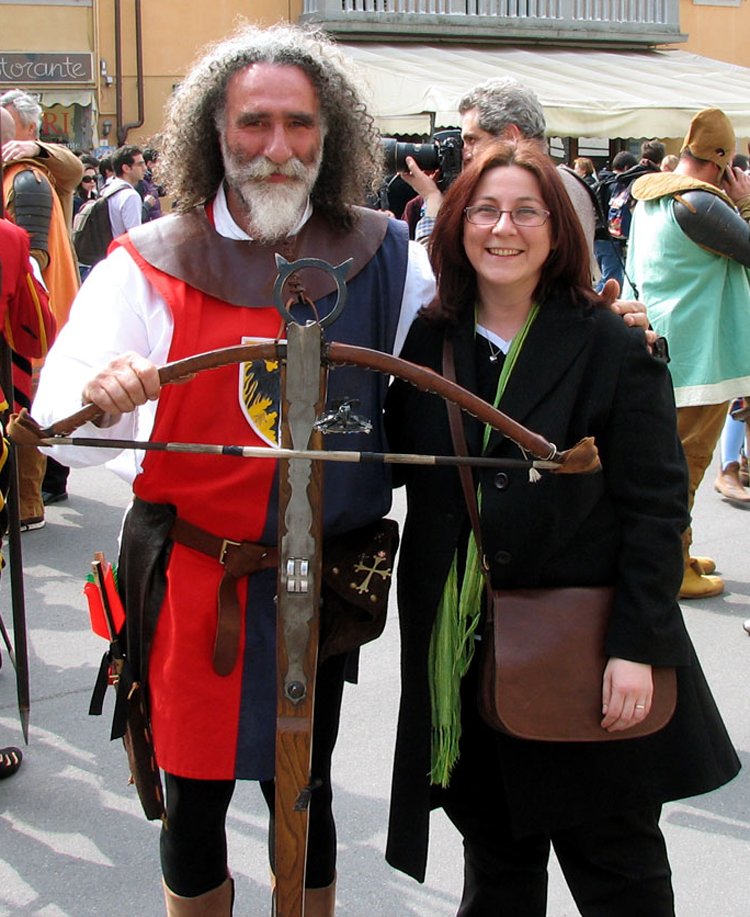 And today, Pisa keeps celebrating its 2011 with exhibitions, conferences and live music!

Here is the video of the first part of the celebrations (90 seconds):

Here is the video of the final part of the celebrations (86 seconds):