When I was a kid, it was still very common to hear people talk of “pane e companatico“, meaning essentially “bread and whatever goes with it”. This is a linguistic trace of the central role played by bread in the Italian culinary tradition, especially when “companatico” was scarce and more expensive than most people could afford. Bread is so important in our dietary tradition that we have national laws explicitly meant to define the different types and the products which can go in its preparation.

Italians apparently eat 66kg of bread per person every year. My grandparents ate bread with anything: pasta, vegetables and even fruit. I remember being served bread and figs and bread and wine with sugar during festive family meals. And every time I go to my parents’ place in the countryside, I cannot but remember my grandfather sitting on a half-broken wooden bench, slicing a stale loaf of bread with his pocket knife and eating it with ripe grapes or peaches.

Often guests ask us about Tuscan bread: how it is made, why we don’t use any salt, whether it is a typical thing of Italian bread, etc. So I started looking into these matters and I discovered a rich and diverse reality. In Italy there are 200 different types of bread (which can be classified in 1500 subtypes): every region has its own special types.

Bread is generally made with flour, water and leaven. However, there are many different types of bread made with flour obtained from cereals other than wheat, such as maize, pulses, or soy beans. In the past, the dough was prepared and left to rise for a couple of days in a cool and dry place. The freshly baked loaves were generally made once a week and preserved in a similar way.

The southern and northern regions of the country have the largest number of officially recognized types of bread, most of which have received a D.O.P. (Di Origine Protetta), D.O.C. (Di Origine Controllata) o I.G.P. (Indicazione Geografica Protetta) certification.

Bread with no salt is by no means a national thing: on the contrary, it’s the distinguishing feature of the bread made in Tuscany, and in some parts of Umbria and Le Marche. This makes it particularly suitable to accompany tasty and salty cured meats, “crostini” sauces, and aged cheese typical of the local cuisine, but also to be used as a base for traditional soups like “minestra di pane” and “ribollita”.

This peculiarity of the Tuscan bread goes back to the 12th century, when the Pisans hampered the salt trade to damage their worst enemies, the Florentines. This made it too expensive for the humble people of the region to buy salt.

There are many local varieties of bread in Tuscany, all of which tell of an ancient culinary tradition. Besides the typical “pane toscano“, other delicious types of bread produced in Tuscany are: 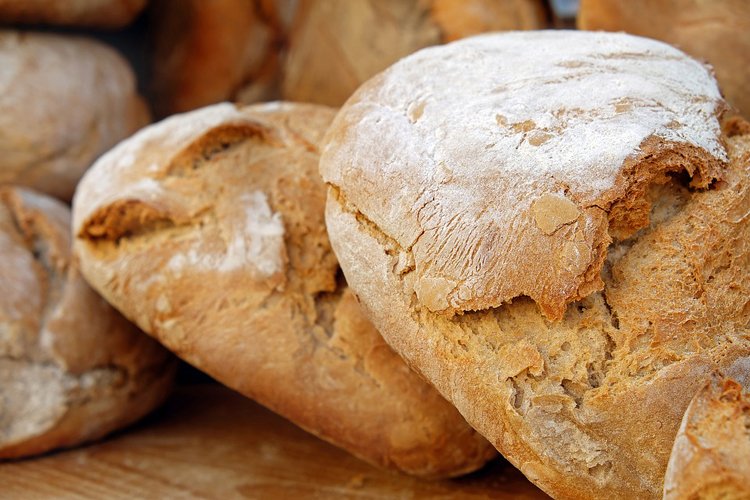 Some popular types of bread from Northern Italy are:

Some popular types of bread in the regions of central Italy are:

Some popular types of bread in the regions of Southern Italy are:

I would like to thank Monica Cesarato (@monicacesarato) for telling me about bussolà and tigelle!