I have just received the program for this year’s Giugno Pisano! The newsletter says…

“The key date is June 16, with the Luminara di San Ranieri: over 100,000 candles are carefully placed in smooth, transparent glasses and hung on white wooden frames arranged to emphasize the outlines of the buildings, bridges, churches and towers that overlook the Lungarni. This year, a solemn edition will close the jubilee year of the patron saint of Pisa, in the 850th anniversary of his death.

Then, on the night of Saturday June 25, the traditional Gioco del Ponte, the historical event divided into two separate, but equally significant, moments: the Historical Procession on the Lungarni, with over 700 characters, and the “battle” staged on the Ponte di Mezzo. Here, the teams from the city’s two rival districts (Tramontana and Mezzogiorno) put their strength to the test by pushing a heavy cart in opposite directions in a heated moment  of fierce competition.

But the Giugno Pisano has a full thirty days of events to offer, with three protagonists: the city, its river and the sea.”

Events in the center of Pisa

The lights of the night in the churches of Pisa

Every Wednesday, from 9 to 11 pm, four of the most beautiful churches of the city will be open at night: Santo Stefano dei Cavalieri, San Sisto, San Pietro in Vinculis and Santa Cristina.

On the night of June 16, the Luminara along the river Arno, and the day after, June 17, the Palio di San Ranieri, (the Historical Regatta of San Ranieri): four boats, each representing one of the city’s oldest neighbourhoods — Santa Maria, San Francesco, San Martino and Sant’Antonio — go head-to-head on the waters of the river Arno in a boat race, a legacy of the tradition of the Maritime Republic of Pisa. Palazzo Blu hosts the exhibition “Women of Italy. Half the Unity” untill June 26 (free admission). The exhibition, set up for the 150th anniversary of the Unification of Italy, tells the story of the country as seen through the eyes and vicissitudes of its most representative women. Open until 10 pm (Saturday and Sunday until 11 pm). 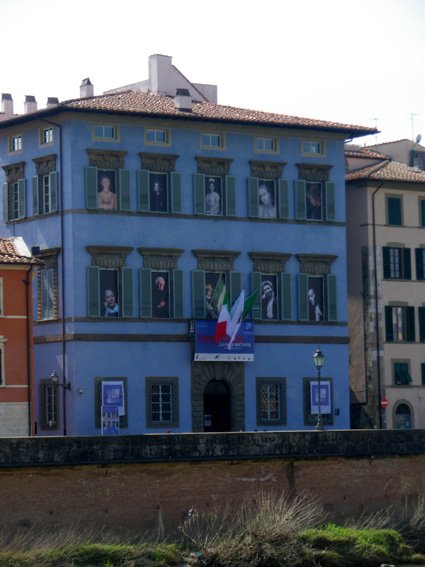 From June 17, night opening of the Leaning Tower and the Monumental Cemetery in the Piazza dei Miracoli. In the afternoon of Saturday, June 4, 11 and 18, there will be a guided tour of the Piazza entitled “Art and History of a great Maritime Republic”.  Further information: Tel. 050 822207, www.pisaguide.com

An opportunity to visit Pisa on foot:

The flavours of Giugno Pisano

A chance to discover recipes and typical products of the true Pisan cuisine, thanks to a special menu “Giugno Pisano”, available from Monday to Thursday in 14 restaurants in Pisa and surroundings.

The river Arno is the second protagonist of the Giugno Pisano with Argini e Margini, a restaurant and wine bar along the river bank, with its menu of drinks and good music.  (My favourite place in Pisa! See our evenings at Argini e Margini)

Starting from June 2 (every Thursday, Friday and Saturday from 8 pm), the bathing establishments of Marina di Pisa, Tirrenia and Calambrone will offer the most agreeable, amusing and intriguing entertainment with a series of evenings entitled Il mare nel bicchiere (The sea in a glass). The Giugno Pisano 2011 will be a special month in the province of Pisa too.