Olive trees and palms… the sacred and the profane!

Yesterday, we celebrated Palm Sunday, or la Domenica delle Palme, as we call it in Italian. It’s the Sunday before Easter, and the official opening of Holy Week (Settimana Santa). Palm Sunday commemorates an event mentioned by all four Canonical Gospels: the triumphant entry of Jesus into Jerusalem in the days before his Passion. However, as in many other cases, “the sacred and the profane” mix in our culture.

In many churches throughout the world, palm leaves are blessed and offered to the people at the mass. Not in Tuscany, though: here we get “l’olivo benedetto“, a blessed branch from an olive tree.

The choice of the olive tree over palm leaves is obvious: palm trees are not really common in Tuscany, whereas olive trees are and they are pruned at this time of the year, so it is very easy for churches to get some branches to bless and give away.

We keep them as a blessing to our homes (well, to the homes of those who believe at least). People who don’t go to the mass, though, in small communities like ours, are probably getting a branch anyway: kids go door to door delivering bags filled with the blessed leaves and in return they get a few euros for the church. Everybody gives something, even those who don’t believe or who do, but never go to church (lots of those in Italy).

The olive tree pruning season is a big deal and has a ritual of  its own. Every farmer has his own secret tricks for pruning: it’s a very important operation, which can determine the success or the failure of the harvest. 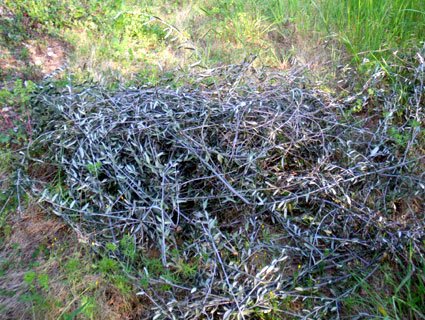 My dad loves pruning olive trees. He waits for the perfect time, prepares his tools, and finally spends hours in his olive groves every day. Complicated years like this are an interesting challenge for him: first it gets cold, then it gets warm, then it snows, then it gets really warm again! He’s always proud of himself when he gets the timing right!

He took a course once. And he spent the whole time mocking the instructor, because he believed that the techniques being taught were not suitable for our area. Apparently he was right, because he always gets fabulous harvests even if he does his own thing. And he loves poking fun at the other people he met in the course (most of them were new to olive growing) and who follow the “rules” and get poorer results!

After pruning the trees, the branches need to be moved away from the trunk of the tree. Most people burn them or give them away to some company who uses them to make compost. My dad uses them to make his own fertilizer. And that’s what awaits us over the Easter holidays, I guess…!