Yesterday, the exciting results of the latest research on Holy Roman Emperor Henry VII’s mysterious death were presented in Pisa.

Most people associate the name of Emperor Henry VII with Dante’s Divine Comedy. Dante was one of his most fervent supporters. Henry VII is best known for his “descent to Italy”, where he came with the intention of restoring the glory of the Holy Roman Empire. However, the situation in the country had changed in an irreparable way: years of internal fights had led to the rise of either Guelph or Ghibelline city-states, where rivalries were fostered by urban nobles supporting powerful rulers, or by the rising bourgeoisie, the new merchant class, which essentially ruled oligarchic republican states such as Florence.

Henry VII mysteriously and suddenly died in Buonconvento, near Siena, and was buried in the Cathedral of Pisa. He wasn’t even 40 when he died, probably poisoned (many believe).

Pisa was a Ghibelline city and happily accepted to accommodate the emperor’s remains in a monumental tomb inside its cathedral. The original tomb was built in 1315 by Tino di Camaino and was placed behind the High Altar in the apse, so as to show the devotion of the city to the Henry VII. But, for political reasons, it was removed and until 1985, it remained in the right transept of the cathedral, near the tomb of the Patron Saint of the city, Saint Ranieri. 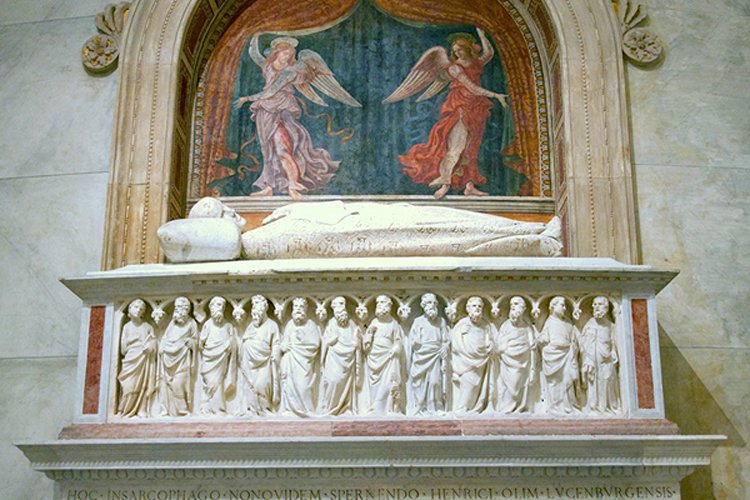 (More on Henry VII on Wikipedia)

Last year, on the occasion of the 600th anniversary of his death, a team of researcher of the University of Pisa reopened Henry VII’s sarcophagus, and studied its content. Beisdes the remains of the emperor (partially cremated bones and his skull), the researcher found a crown, a sceptre and a silver orb, the symbols of his power. But the most interesting discovery was a rectangular 3 mt long silk shroud, which they defined “a rare testimony of the noble production of silk textiles dating back to the beginning of the 14th century”.  These objects will be placed in the Museo dell’Opera del Duomo. The remails will be analysed by a pool of anthropologists so as to try to determine Henry VII’s real cause of death.

If you are interested in this research, you can read more about it on the website of the University of Pisa.

The video of the opening has no sound, but it is incredibly interesting.

And the photos which accompany the press release are also a must see.

If you are looking for accommodation in Pisa, please check our vacation rental apartment Behind the Tower.