When the ladies proposed “grab bag” as a theme for this month’s Italy Blogging Roundtable post, I was not sure what it meant. I went to check online first, but the definitions I found on the Urban Dictionary did not seem quite right…

1. A list of girls/guys you can date or get with. These said girls/guys are friends of yours or girls/guys who are close to you.

2. A person wearing large and/or baggy clothing making it difficult to tell what kind of body she/he has underneath.

I resolved to get back to the ladies, and Rebecca was so kind as to give me the politically correct definition (and the most literal I suspect!). I thought about what I should write for a while, without really coming up with anything interesting to say. Until last Saturday, when I found an old bag in my parents’ garage while desperately trying to locate some books I must have stored in the wrong place in the attempt to create a bit of space in our apartment.

I recognized it right away. It was a plastic bag which I had used to empty out my grandfather’s bedside table’s drawer after he passed. I was not ready to think about what to keep and what to throw away then, so I just emptied the plethora of tiny objects and old notes in a plastic shopping bag and put it in a box with other random items I had not idea how to handle.

9 years have already gone by.  This time, I was ready to open the bag and see what he had kept for so long, because he loved it or maybe because he also didn’t want to make any decision about it.

I opened the bag, and the unmistakable smell of my grandfather’s house struck me right away: that incredible mix of tobacco, grease from agricultural machines, and cheap soap. Sometimes I can still smell it in our apartment. I tried to close and open the bag several times to see if that simple gesture could bring back the same incredible amount of memories and feelings it had poured on me when I had first opened it, but it was gone. All I was left with was a bag full of dusty objects and a few yellow pieces of paper.

I went for the notes first. There was a piece of paper which had been thorn from a planner I think, one of those banks used to give out in January in the 80’s and 90’s. On this page, there were a few handwritten telephone numbers, without the area code even, so they must be going back to the time when you could simply dial the number without the area code if it was the same as the one you were calling from. I threw those away right away.

There was an old doctor note certifying that my grandfather was fit to drive: I guess he had needed it to renew his driving license. That also ended up in the pile of items to throw away.

Then I found an old postcard in black and white. It recognized the familiar view right away: it was a postcard from Pisa. I turned it and it was a postcard that my father had sent to my aunt, his sister, in the 60’s while he was carrying out his national service as a parachutist in the city. It was a very sweet message to his little sister, who was only 12 then. That was a find, so I have kept it to give it to my aunt. 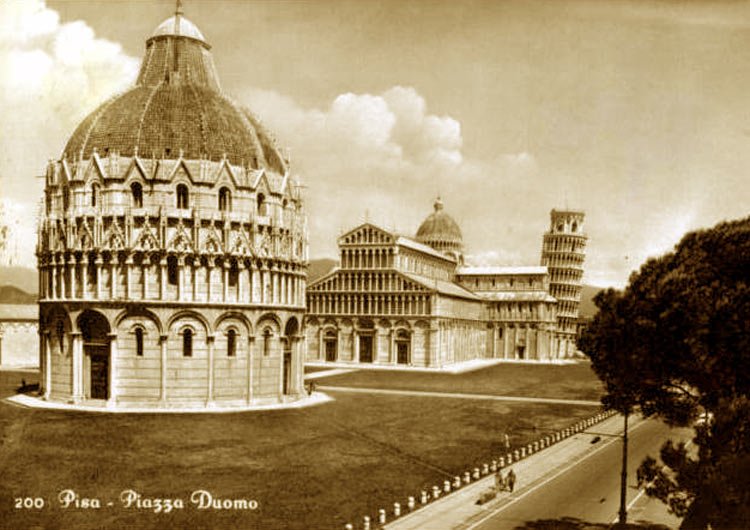 I also found a very old photo of my grandparents. They were young and smiling in Pietrasanta. It must have been the 50’s judging from my grandmother’s hair style. I resolved to scan that photo so that I can give a copy to my parents and my aunt.

After throwing away a few empty envelopes and some information sheets for medications, I moved on to the many tiny objects gathered at the bottom of the bag. I recognized several icons that had belonged to my grandmother.

I have written about her a while back: my grandparents both died on August 10th, 24 years apart though. My grandmother died very young, in 1980. To think that my grandfather had kept these icons all those years made me smile: he had been an anticlerical, non-believer, blasphemous socialist all his life to the point that he refused the last rites before passing. All of a sudden, this seemed like a very tender thing to do for a man who had never shown much tenderness to anybody. Obviously, his feelings for my grandmother had remained unchanged after her early departure and certainly had shaped his personality and his beliefs. My grandfather did certainly hold a grudge with God, to the point that when he saw my mother praying he asked her to stop, because, he said, “He did not look upon us before, why should He care now?!” And when my mum answered that it was never to late, my grandfather simply replied “He should have thought about this before“, as if it was God who had something to apologize for. I will never forget the look of disappointment and resentment I saw in his eyes. Clearly he felt he had suffered a real injustice. And clearly he was less of a non-believer than he thought he was.

I remembered one of the icons very well. It was a plastic figurine representing the Holy Virgin in a shrine with a golden plastic door that opened. I remember playing with it but I remembered it so much bigger. Of course I did. I was only 5 when my grandmother passed, so my hands must have been much smaller. I remember pretending this was an old witch living in a tower whom I had seen on the only daytrip I ever took with my grandparents to “La Città della Domenica” near Perugia. My grandmother kept imitating the old lady and I guess that little figure reminded me of the window behind which the witch appeared in the park.

At the bottom of the bag I also found my grandmother’s old wooden rosary, all tangled up. It is quite unique, with large wooden beads and a big Cross at the end of it with a very severe-looking Jesus. I remembered it on the wall behind the bed, in what is now my baby’s room. It used to scare me so much! I decided to put it back in the bag and give it to my aunt if she wants it… I still find it quite scary.

Then I found some more “profane” objects, which had obviously belonged to my grandfather: a wild-bore tooth, a plaque to commemorate his performance as the best hunter in 1987, a couple of old empty cartridges, a few Italian Lira coins, some old keys.

It was a trip down memory lane. And at the same time it got me thinking of how that drawer had preserved the same interesting mix my grandparents must have been in real life. My grandmother, with her faith, her great sense of humour, her light-hearted spirit, and her big smiles; my grandfather, witty, moody, non-spiritual, grouchy, touchy, practical. He must have missed her so very much, and I am sorry I was too young to be able to say I actually got to know her. I do certainly miss my grandfather a lot. It was nice to be able to “spend some time with them” again thanks to this “memory grab bag”.

This is the 21st post in a monthly series called The Italy Blogging Roundtable. Here you can find the posts of the other bloggers who participate in the roundtable. Our topic this month was “grab bag“: