It will be the first strike of bloggers ever.

On July 14, 2009, Italian bloggers will muzzle themselves in the Web as well as in Piazza Navona in Rome, at 7PM where they will meet to protest against an Italian government bill (the Alfano decree) introducing a number of new rules which will limit the freedom of expression in Italian internet.

The so-called “obligation to rectify” imposed to the manager of an information site (blogs, social networks such as Facebook, Twitter, etc) clearly appears to be a pretext. In fact such imposition, in terms of bureaucratization of the network and of very heavy penalties for users, shall make of the new decree an internet-killer.

The practical effects shall be to cause the independent sites and blogs to cease or materially reduce their publications.

The apparent intent of introducing criteria of responsibility hides the attempt to make life difficult or impossible for bloggers and users of shared sites (for example: You Tube…)

The fact is that bloggers are already entirely liable, from a penal standpoint, in the event of crimes such as insults, defamation etc: there is no need to introduce unbearable penalties for “citizen-journalists” who do not intend to submit themselves to the bureaucracy and the burdens contemplated in the Alfano decree. 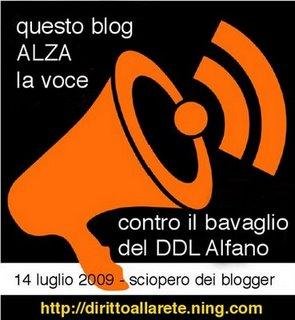 The plurality of information, regardless of the media, internet, newspapers, radio and tv networks etc, is a fundamental right of men and citizens, on which democracy and freedom are based. The Alfano decree is an attack to the freedom of all media, from the major newspapers to the smallest blog.

For this reason we invite all Italian blogs and sites to a day of silence, in the day in which newspapers and tv networks will also remain silent. It is a message of all operators in the media world, who jointly shout to the political world: “we don not want to be gagged“.

We therefore invite all citizens with a blog or a site to publish this logo and mantain it for the entire day of July 14 next.
Defending the press, the tv and radio networks, the journalists and the Web, we firmly defend the basic freedom of information and the future of our democracy.
Alessandro Gilioli
Guido Scorza
Enzo Di Frenna